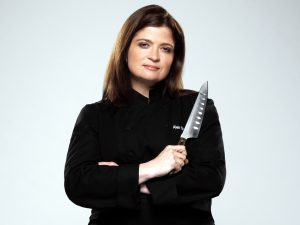 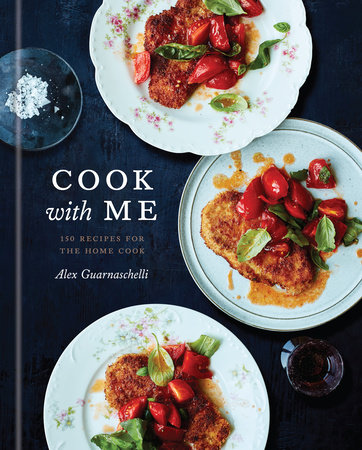 There are few American chefs, much less female chefs, who can boast staying power in Michelin-starred restaurants. Chef Alexandra Guarnaschelli can boast indeed — she embarked on a culinary journey in France and ended up working in some of the country’s top restaurants including esteemed chef Guy Savoy’s eponymous three-star kitchen.

Not surprising for the daughter of esteemed cookbook editor Maria Guarnaschelli, who spent her childhood surrounded by food. Guarnaschelli learned to eat according to whatever book her mother was working on at the time: one year was devoted to Indian with Classic Indian Cooking by Julie Sahni; another year was devoted to Italian with The Splendid Table by Lynne Rossetto Kasper.

“My mother was always coaxing me from my ‘Barbie land’ under the dining room table to peel potatoes, knead bread or assemble a trifle,” says Guarnaschelli, who jokingly continues, “what else could a seven-year-old have wanted from life?”

This early emphasis on her palate truly shaped her future in food. On the day of Guarnaschelli’s graduation from Barnard College in 1991, she decided to explore her culinary interests and began working under the tutelage of the acclaimed American chef and restaurateur Larry Forgione.

Forgione encouraged Guarnaschelli to travel and expand her skill set, so she obligingly moved to France to do a work study at La Varenne Culinary School in Burgundy. After school and traveling throughout France, she moved to Paris to begin a four day stage at the Michelin three-star restaurant Guy Savoy. Four days turned into four years with Guarnaschelli rapidly being promoted to sous chef at La Butte Chaillot, another Savoy establishment. “The first three months were terrifying — imagine being a young American woman in charge of a French kitchen with 10 young, male cooks under you? Professionally, it was a life-changing experience,” she says.

After seven successful years in France, Guarnaschelli returned stateside. Though she left the country, she maintained her connection with the cuisine, joining the venerable Daniel Boulud at restaurant Daniel, where she quickly rose through the ranks to become sous chef at the Manhattan standard. Always looking to expand her culinary knowledge, Guarnaschelli moved to Los Angeles for two years to join Joachim Splichal’s Patina Group, where she worked at the acclaimed Patina restaurant in West Hollywood before moving to New York to open Splichal’s first New York City venture.

In 2003, Guarnaschelli was given the opportunity to expand her repertoire and become the executive chef at Butter Restaurant, where she would create her own eclectic American and green market-inspired menu. In addition to her restaurant work, Guarnaschelli inspires budding chefs as a Chef-Instructor at New York City’s Institute of Culinary Education. Guarnaschelli is also helming the kitchen of the NYC modern dining and cabaret concept, The Darby.

Chef Guarnaschelli is a recurring judge on the popular prime-time series Chopped and is featured on her own shows, The Cooking Loft and Alex’s Day Off, which launched in October 2009. She has appeared on Food Network’s Iron Chef America as both a challenger and a judge and competed on season 4 of The Next Iron Chef. In 2012, she bested nine rival chefs to win The Next Iron Chef: Redemption and joined the ranks of Kitchen Stadium Iron Chefs. Alex’s first cookbook is Old-School Comfort Food: The Way I Learned to Cook (Clarkson Potter, 2013).