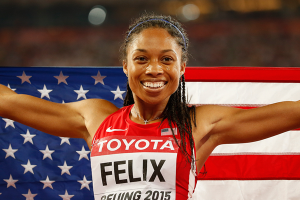 Having stepped on the world stage as a passionate 18 year old in her first Olympic Games, Allyson Felix, has redefined athletics as she continues to cement her iconic status on and off the track.

Allyson grew up in Los Angeles, California. Her father, Paul, is an ordained minister and was an excellent sprinter as a teen. She inherited her long, lean legs from her schoolteacher mother, Marlean. Allyson’s interest in the sport began watching her older brother, Wes, run. However, she did not try out for the school track team until her freshman year at Los Angeles Baptist High School in North Hills.

She never expected that she would find one of her passions on that high school track, but she did and has never looked back — amassing an incredible 13 global titles, 10 United States Championships, 9 Olympic Medals, and a World Record. Her accomplishments solidify her as one of the greatest female athletes the world has seen and has garnered attention from the top media publications in the world. Features have included: Vogue, Glamour, Essence, Self, O Magazine, Sports Illustrated, and Elle.

Allyson has proven herself a force on the track, but has still made time to graduate with an elementary education degree from the University of Southern California. She also has a heart for her community and serves as an ambassador for Right to Play and Play Works, as well as being a member of The President’s Council on Fitness, Sport, and Nutrition. Felix has recently turned her attention to helping the NFL’s Nnamdi Asomugha provide Los Angeles area teens with tools to prepare themselves for higher education through their ACTS College Summit.

It is hard to imagine that although Allyson was the fastest high school 200 meter runner in history, has the most World Championship titles in United States history, and has an Olympic and World Record that aspects of her career are still in the beginning stages, but in 2015 she has began to pursue the 400 meters and has already earned a world title and delivered the fastest 400m relay split in World Championship history. It seems the best is yet to come.