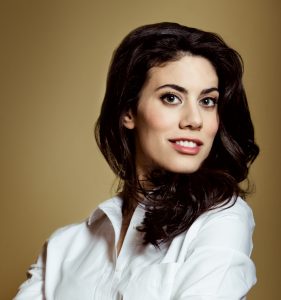 Claire Robinson combines her passions for food and television in 5 Ingredient Fix, a Food Network series featuring delicious eclectic recipes made with five ingredients or fewer. She believes the best dishes feature carefully selected fresh foods with distinct flavors and a straightforward cooking style that also promotes healthy and seasonal eating. Claire also joined Food Network’s primetime lineup as the host of Food Network Challenge (as of April 2010), bringing her culinary knowledge and passion for the iconic show to its brand-new set and providing minute-by-minute details of the thrilling challenges.

With a multiethnic background, Claire cites her French-speaking grandmother as a major influence on her love for food, a joy passed on through many generations. Born in Jacksonville, Fla., Claire (and her family) spent time in St. Augustine, Fla.; Houston; and New Orleans, but ultimately settled in Memphis, Tenn.

Claire graduated from the University of Memphis in 1999 with a B.A. in Communications. While in college, she worked at Maggie’s Pharm, where she learned to appreciate the amazing flavors and scents of, and uses for, exotic herbs and spices — a love she applies to her cooking today. She gained behind-the-scenes media experience at Memphis’s CBS affiliate, WREG-TV, and at WMC-FM radio. At Tiger Sports Properties, a sports marketing agency, Claire handled marketing for the University of Memphis’s athletic department.

Despite enjoying her jobs, Claire realized she would never love another career the way she loved cooking. She decided to pursue her dream by moving to New York City and attending the French Culinary Institute; she graduated in November 2005. Along with being an accomplished private chef, Claire spent time working on culinary production teams for several cooking series, including Food Network’s Easy Entertaining With Michael Chiarello and PBS’s Everyday Baking for Everyday Food.

Aside from cooking, Claire enjoys a variety of unique sports including skydiving, boxing and slalom waterskiing. She currently lives in New York City.