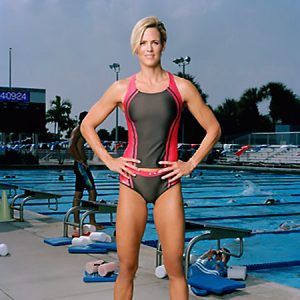 Winner of twelve Olympic medals, the first athlete to appear as a model for the Sports Illustrated Swimsuit Edition, a successful broadcaster, and a mother, Dara Torres has shattered expectations by making her record fifth US Olympic team. In her second comeback after six years away from the pool, Torres became the oldest female swimmer – at age 41 – to make the Olympic team. Competing against women half her age, she has been unstoppable, breaking the US record in the 50m freestyle multiple times on her way to Beijing.

A competitor on the international stage since the age of 14, Torres carried her success to the University of Florida where she earned the maximum 28 possible NCAA All-American swimming awards. At the 2008 Beijing Olympics, she won three silver medals, two in the 4x100m freestyle relay and 4×100 medley relay, and one in the 50m freestyle race – the highest medal she’s ever won in an individual event.

Her impressive performance in Beijing has inspired many older athletes to consider reentering competition, including cyclist Lance Armstrong. Torres herself has shown no signs of slowing down anytime soon, having competed in the 2009 FINA World Championships in Rome, and having not ruled out entering the 2012 London Olympics.

Outside of swimming, Torres has had great success as a television commentator and was a feature correspondent for Good Morning America, worked on-air for ESPN, TNT, and Fox News Channel, and had stints on NHL Cool Shots and Fox Sports Sunday. Her inspirational memoir, Age is Just a Number: Achieve Your Dreams at Any Stage in Your Life, was recognized as a top 25 best-selling business book.