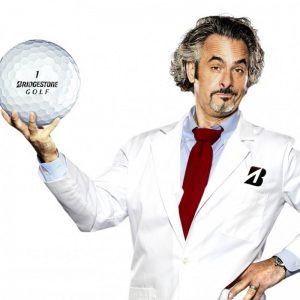 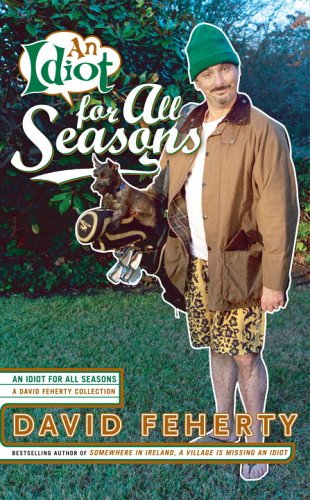 David Feherty is a retired European Tour and PGA Tour professional golfer, who now works as a writer and broadcaster. He is known by many for his good sense of humor.

Feherty was born in Bangor, Northern Ireland and spent most of his playing career in Europe, where he won five times and finished in the top ten of the European Tour’s Order of Merit twice, coming tenth in 1989 and eighth in 1990. He spent 1994 and 1995 playing mainly on the PGA Tour, and the best result on the tour was a second place finish at the 1994 New England Classic. His combined career prize money exceeded $3 million.

In 1997, Feherty retired from both the European and PGA Tour and joined CBS Sports as an on-course reporter and golf analyst. Feherty is also a frequent contributor to Golf Magazine and has his own column in the back of the magazine called Sidespin. He is also the New York Times and Booksense bestselling author of three books, A Nasty Bit of Rough, Somewhere in Ireland a Village Is Missing an Idiot, and David Feherty’s Totally Subjective History of the Ryder Cup.

Feherty is also a co-announcer on EA Sports’ Tiger Woods PGA Tour series along with Gary McCord. He lives with his wife, Anita (whom he calls “She Who Must Be Obeyed” in his Golf Magazine column), and five children in Dallas, Texas. He is a periodic guest on Dallas’ sports radio station, KTCK. He also currently features in advertisements for the Cobra golf company, showing off his trampolining and cheerleading skills in the advert, to show off the company’s Speed drivers &; woods.

Feherty has had a long struggle with depression and alcoholism, which he publicly addressed in 2006. In an interview with Golf Magazine about his problems, Feherty said that his therapy for depression was instrumental with him getting off the bottle, saying that “I used alcohol to mask my inner demons”. The outspoken columnist then took a shot at actor and noted Scientologist Tom Cruise, who has said that therapy and drugs are useless and that depression can be cured by physical exercise: “Actually, some sort of exercise would have helped me. If I kicked the shit out of Tom Cruise, I’d feel a lot better about myself.”

Along with George Lopez, Feherty hosted the Lopez – Feherty Foundation Anti-Pro-Am in November 2005.

In 2008, Feherty was hit by a truck, while cycling. He suffered three broken ribs, which punctured his lung. He was hospitalised for a few days with a tube in his chest, “It’s not as bad as it sounds,” he said. He resumed his broadcast duties at the 2008 Masters.