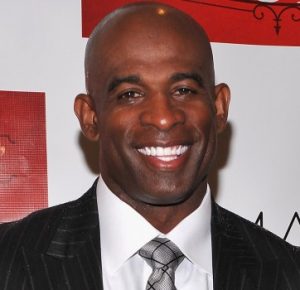 Only Athlete To Win Both A Super Bowl & World Series

Deion Sanders, affectionately known as Prime Time, is considered one of the most flamboyant and gifted athletes in recent American sports history and is one of the few professional athletes to excel in both baseball and football.

During his 14-year NFL career, Sanders was one of the most feared pass defenders to ever play the game. His 19 defensive and return touchdowns are an NFL record. He was selected to eight Pro Bowls.

He was the fifth pick overall in the 1989 NFL Draft by the Falcons, where he played until 1993. After five seasons with the Falcons, Sanders signed with the 49ers. Sanders was voted the 1994 NFL Defensive Player of the Year and recorded an interception in the 49ers 49-26 win over the San Diego Chargers in Super Bowl XXIX.

Although Sanders is best remembered for his football prowess, he also enjoyed a nine-year, part-time baseball career, playing in 641 games with four teams. In 1992, his most productive year, he hit .304 and stole 26 bases in 97 games for the Braves. During the 1989 season, he hit a home run and scored a touchdown in the NFL in the same week, the first player to do so. Sanders is also the only man to play in both a Super Bowl and World Series.

Prior to his professional sports career, Sanders was a All-American at Florida State. He won the Jim Thorpe Award in 1988 and is widely considered to be one of the best cornerbacks to ever play college football.

Deion currently works as a co-host for the NFL GameDay show on the NFL Network.