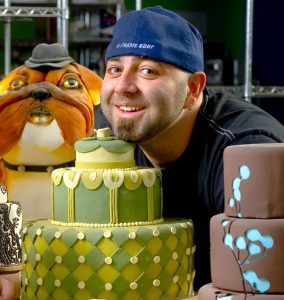 Duff has been cooking since the age of 4, when his mom caught him in the kitchen swinging a meat cleaver while watching Chef Tell on TV. While in second grade, he came close to cutting off his pinkie while carving a pumpkin, and knew he was destined to work in the kitchen. Duff started working professionally when he was 14 at a bagel shop, where he was almost fired for making the sandwiches too big. Ever since then, he’s been putting his own crazy spin on food.

After graduating from the University of Maryland, Baltimore County, with degrees in history and philosophy, Duff went on to study at the Culinary Institute of America at Greystone in St. Helena, Calif. He worked at several acclaimed culinary destinations, including the French Laundry, the Vail Cascade Hotel and Todd English’s Olives before returning to Baltimore in 2000 to become a personal chef.

In March 2002, Duff quit his day job and opened Charm City Cakes. There, he was able to show off his creativity, which comes from a long line of artistic genes. The bakery became a household name on the hit Food Network show Ace of Cakes, which aired for 10 seasons. Duff is also a graffiti artist, a metal sculptor and a musician who plays bass in the Elvis tribute band Danger Ace and the indie band Sand Ox. More recently, Duff and his team opened a second bakery location, Charm City Cakes West in Los Angeles.

More information about Duff Goldman can be found on his website, www.charmcitycakes.com.