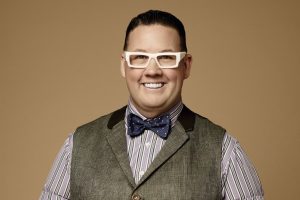 Co-Host and Judge on Fox’s “MaserChef” and “MasterChef Jr.”

Graham Elliot, a critically acclaimed chef, restaurateur and television personality, is one of the most recognized faces cooking in America today. Growing up a “Navy brat” allowed him the opportunity to travel the world and all 50 states, opening his eyes and mouth to the amazing flavors found around the globe.

At age 27, Elliot became the youngest four-star chef to be named in any major U.S. city and was named one of Food & Wine magazine’s “Best New Chefs” in 2004. In May of 2008, Elliot opened his eponymous restaurant, Graham Elliot, which is now one of only 15 restaurants in the U.S. to be awarded two Michelin stars. In June 2012, he opened Graham Elliot Bistro in Chicago’s West Loop. The bistro uses old-school techniques and ingredients to showcase its take on classic American cuisine. That same year also saw Elliot named Chef of the Year and inducted into the Chicago Chefs Hall of Fame. Additionally, Chicago Mayor Rahm Emanuel proclaimed September 19th “Graham Elliot Day” in the city of Chicago.

After six years and a combined nine seasons as co-host and judge on Masterchef and Masterchef Jr., Chef Elliot will return to Bravo’s Emmy award winning franchise, Top Chef where he appeared on two seasons of Top Chef Masters. Elliot has also been notably featured on Next Iron Chef America, Craziest Restaurants in America and most recently on Cooks vs. Cons. As a life-long baseball enthusiast, Major League Baseball has tapped him to be the new host of their upcoming 2016 digital series “MLB Grub Tour Paired with Budweiser.”

Elliot, also a singer and guitarist, is the Culinary Director of Lollapalooza, where he caters to the headlining bands and oversees the food offerings at the festival. In recent years, Elliot has accrued several prestigious accolades, including multiple James Beard Foundation nominations, as well as being named one of Crain’s “40 Under Forty,” alongside President Barack Obama and Oprah Winfrey.
Elliot resides in Chicago with his wife and business partner, Allie, and their three children, Mylo Ignatius, Conrad Matthias and Jedediah Lindsay.