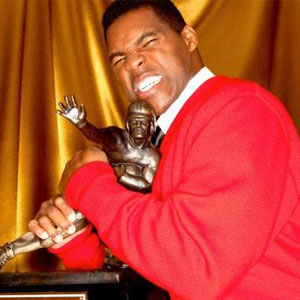 Retired football player, Herschel Walker, was born on March 3, 1962 in Wrightsville, Georgia. Walker is a former NFL running back who played at The University of Georgia in college and professionally in the United States Football League and the National Football League. Walker is considered by many to be the greatest college football player of all time.

Herschel Walker played running back for the University of Georgia, where he was an All-American and won the 1982 Heisman Trophy. Walker was successful even in his freshman season in 1980, setting the NCAA freshman rushing record and finishing third in the Heisman Trophy voting. He would go on to win the Heisman in 1982, his junior year. In 1999, Walker was elected to the College Football Hall of Fame.[4]

In the formation of the USFL, Walker saw an opportunity to do something then forbidden by NFL rules, namely, to turn professional after the end of his junior season rather than wait for his collegiate class to graduate (four years after the high-school graduation of his peer group). He also sought to choose where he would play professionally, as he felt he could make considerable money from product endorsements as he was quoted on one occasion: “I don’t know if I would want to play in the NFL unless it was for the two New York teams or the Dallas Cowboys.” (As it turned out, however, Walker attracted only one major advertising deal, in a joint promotion by McDonald’s and athletic-shoe manufacturer Adidas in the ad, Walker’s line was, “First the Big Mac meal—then the Adidas deal,” referring to discount coupons on Adidas merchandise that accompanied the purchase of a Big Mac at McDonald’s.

With endorsement considerations in mind, Walker signed with the New Jersey Generals in 1983, owned by Oklahoma oilman J. Walter Duncan, who after the 1983 season sold the team to real-estate mogul Donald Trump. In order to circumvent the league-mandated $1.8-million salary cap, Walker signed a personal services contract with Duncan (later compensated by Trump) to the protest of no one, as the other owners appreciated Walker’s name value to the league. Similar arrangements were made later when other big-name college stars signed with the league. Although this move was challenged in court, Walker and the USFL prevailed, and Walker began play with the Generals.

The NFL’s Dallas Cowboys, suspecting that the USFL was not going to last, acquired Walker’s NFL rights by selecting him in the fifth round of the 1985 draft. When the USFL in fact succumbed after its technically successful, but financially fruitless antitrust suit against the NFL in 1986, Walker went to play for the Cowboys, eventually establishing himself as a premier NFL running back with two consecutive Pro-Bowl seasons (1987 and 1988).

In 1989, at the height of his NFL career, the Cowboys traded him to the Minnesota Vikings for a total of five players (LB Jesse Solomon, DB Issiac Holt, RB Darrin Nelson, LB David Howard, DE Alex Stewart) and six draft picks (which led to Emmitt Smith, Russell Maryland, Kevin Smith, and Darren Woodson). This was judged to be one of the turning points in the rise of the Cowboys to the top echelon of the NFL. Nicknamed the “HWT” (Herschel Walker Trade), Walker’s trade was widely perceived as an exceptionally poor move considering what the Vikings had to give up in order to get him, and remains one of the most frequently vilified roster moves of the team’s history. The Vikings coaches reluctantly accepted Walker after the trade and never totally used the tool they had been given. Scout.com says, “but Walker was never used properly by the coaching brain trust (a total oxymoron in this case).” [6] “Herschel the Turkey,” a mocking “honor” given out by the Star Tribune newspaper to particularly inept or disgraceful Minnesota sports personalities, is named for him.[7]

Walker played for the Vikings for two and a half years, never amassing 1,000 rushing yards in a season. His rights were then acquired by the Philadelphia Eagles, and, subsequently, the New York Giants. Eventually, he was re-acquired by the Cowboys, where he was used not only as a running back but as a flanker and other offensive positions as well. In addition to running and catching passes, Walker was also often used to return kickoffs throughout his career.

If Walkers’s USFL and NFL numbers are combined, he ranks as one of the most productive professional football runners in history.

Herschel Walker is a born-again Christian who frequently talked about his faith during his USFL interviews. Since his retirement he has attracted little publicity, although he made a guest appearance on The Hour of Power, hosted by noted televangelist Robert Schuller.