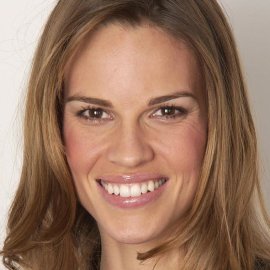 Hilary Swank was a keen swimmer, competing in the Junior Olympics at the Washington State Championships, before turning her attention to acting. Thanks to a run of school plays and local productions, she earned the honour of being named ‘Best Junior Actress’ by the Bellingham Theatre Guild. Her father was a salesman and the family lived in a trailer park while he spent much of his time on the road. When Hilary was 15, her parents divorced, and Hilary and her mother, Judy, headed to LA in search of a new life. Having slept in their car and with various friends, the pair soon settled into Californian life. Hilary enrolled at Santa Monica City College, only to later drop out and continue her studies through a series of tutors. Her first television break came in 1991 thanks to a small role in ‘Harry And The Hendersons’, which then led to parts in ‘Evening Shade’ and ‘Growing Pains’. However, it wasn’t until 1992 that she made her film debut in the cult hit ‘Buffy The Vampire Slayer’. Over the next few years, she appeared in a number of movies and TV series such as ‘The Next Karate Kid’, ‘Sometimes They Come Back… Again’, ‘Kounterfeit’ and ‘Leaving LA’. In 1997, she landed a role in the popular ‘Beverly Hills 90210′ series which helped raise her profile once more, although her character was written out of the show within three months. However, within weeks of being dropped by the show she was cast as Teena Brandon / Brandon Teena in ‘Boys Don’t Cry’. The film was based on the tragic true story of Teena Brandon, a girl from Nebraska who leaves home to start a new life as a boy. Hilary excelled in the role, going on to beat Meryl Streep, Julianne Moore and Annette Bening to win the Best Actress Oscar and a Golden Globe. Hilary’s next projects were to include ‘11:14’, ‘Iron Jawed Angels’ and a return to theatre in ‘The Miracle Worker’. Clint Eastwood’s ‘Million Dollar Baby’ was to provide Hilary with her most physically demanding role to date as a waitress from Missouri who turns to the boxing ring to escape her life. Critics and audiences alike were delighted with her talents in the film and both the Golden Globe and Best Actress Oscar were bestowed on the young actress for the second time. On the personal front, Hilary started dating Rob Lowe’s brother, Chad, in 1992 and the couple married in 1997. However, in 2006 they announced their separation. Swank famously forgot to thank Lowe when she won her first Oscar, but made sure that he was the first person she acknowledged when she scooped her second. In 2007, Swank was quoted as saying that she feels “like in the last couple of years, I’ve really come into my own and a lot of that has come from figuring out who I really am and what I want in life.” Later that year, she starred in the movie ‘Freedom Writers’, which she also executive produced. Her performance in the film generally received positive reviews from the critics. In 2007, she also appeared in horror film ‘The Reaping’, which was being shot in Louisiana at the time Hurricane Katrina struck. 2007 was a busy year for Swank, with the actress also starring in the romantic drama ‘P.S. I Love You’, alongside Gerard Butler. However, the film was largely panned by critics, with one declaring that it will “leave you stunned and stupefied from beginning to end, if you don’t head for the exits first”. More recently Swank appeared as Amelia Earhart in the biopic movie ‘Amelia’.