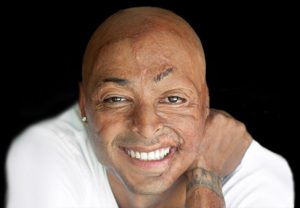 J.R. Martinez is an American actor, motivational speaker and former U.S. Army soldier. Since 2008 he has played the role of Brot Monroe on the ABC daytime drama All My Children, and most recently, emerged as the celebrated winner on Season 13 of ABC′s Dancing with the Stars.
In 2003, Martinez sustained severe burns to over 40 percent of his body while serving as a United States Army infantryman in Iraq. Following his recovery, he has traveled around the country speaking about his experiences to corporations, veterans groups, schools, and other organizations.
During his time in recovery, a nurse asked him to speak to a burn patient, who had just seen his body for the first time and had become withdrawn. After an approximate 45-minute visit, the patient opened the curtain letting light into his room. J.R. then understood the impact he had on this patient and decided to use his experience to help others, visiting with several of the patients in the hospital, sharing his story and listening to theirs.
Since then, J.R. has become a highly sought-after motivational speaker, traveling the country to spread his message of resilience and optimism. He is called on by a wide range of groups, including large corporations, veterans groups, non-profits and schools, and has shared the stage with the likes of global self-help guru Tony Robbins and Evangelist Dave Roever. In 2008, Martinez was honored as a “Shining Star of Perseverance” by the WillReturn Council of Assurant Employee Benefits.
In 2009 Martinez was honored by the non-profit Iraq and Afghanistan Veterans of America (IAVA) with the Veterans Leadership Award, given in recognition of his dedication to our nation′s newest generation of veterans. Martinez has been featured in The Washington Post, People magazine, on CNN′s Sunday Morning, 60 Minutes, and other major national news outlets.
In 2008, Martinez was cast in ABC′s daytime drama, All My Children in the role of Brot Monroe. His character also served with the U.S. Army in Iraq and was injured in combat. Martinez first appeared on the program on Friday, November 7, 2008.