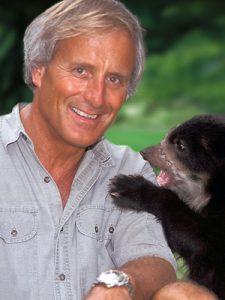 Jack Hanna is a Professional Fellow of the American Zoo & Aquarium Association and a member of the Explorer’s Club. He is a regular guest on shows including “Good Morning America,” “Larry King Live,” “The Late Show With David Letterman,” “Hollywood Squares” and “The Maury Povich Show.” He also makes countless personal appearances and speeches throughout the U.S. Not only was he a regular on national talk shows, his autobiographical book, “Monkeys on the Interstate,” was a hit in 1989. Other books, including one for children, “Let’s Go To The Petting Zoo With Jungle Jack,” followed. He is an active supporter of Easter Seals and the Leukemia Society and serves on the boards of several educational institutions. While he takes all of his civic responsibilities seriously, he maintains that wildlife conservation is his true calling.