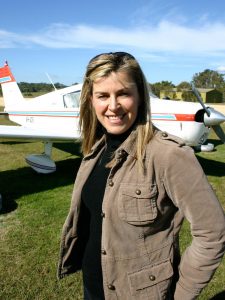 Janine Shepherd ‘s story reads like the plot of a hollywood movie. A champion cross country skier in training for the winter Olympics, her life was irrevocably altered when she was run over by a truck during a training bicycle ride to the Blue Mountains.

Her neck and back were broken in six places, and her right arm, collarbone and five ribs fractured. Her right leg had been ripped open, she had sustained head injuries and massive internal injuries. She had severe lacerations to her abdominal area and had lost five litres of blood. The bleeding alone was enough to kill her.

Doctors warned her parents that she was not expected to survive her ordeal. Even if by some small chance she recovered, she would never walk again.

Coming to terms with her shattered Olympic dreams, refusing to believe what expert medical staff were telling her about her chances of any kind of recovery, Janine focused every sinew of her being on healing her broken body and crushed morale.

Her fighting spirit was rekindled watching small planes flying overhead. She made a decision: ” If I can’t walk, I’ll fly.” And fly she did. While still covered in a full body plaster cast, Janine was lifted into an aircraft for her first flight. That moment changed her life forever.

Within a year she had her private pilot’s licence. Despite remaining a partial paraplegic and with many physical challenges still ahead, she battled on to gain her commercial pilots licence, her Instrument rating, her twin engine rating, and her Instructor’s rating. She then went on to become a fully qualified aerobatics instructor.

And all the while she pushed her body to mend itself, forced her legs to walk again, step by painful step. Although doctors said she would never have children, Janine says her greatest achievement is the three young children she now has. She has since gone on to finish her University degree in Physical Education.

Janine’s story of defying the odds and winning is both moving and inspiring. The title of her bestselling book, ‘Never Tell Me Never,’ says it all. Janine has since written two more books, ‘Dare to Fly’, which was prompted by overwhelming public reaction to her first book, and ‘Reaching for Stars’, which was released in November 1998.

Janine’s autobiographies have become classics in the survivor genre and have been best-sellers. Janine’s life story has been recently made into a feature film, also entitled Never Tell Me Never, starring well known Australian actress Claudia Karvan, and tells of her journey to hell and back.

Today, Janine is much in demand as one of Australia’s most sought after inspirational speakers. She travels extensively in Australia and overseas sharing her story with others.

Janine has recently been named as one of only ten recipients of the ‘Outstanding Young Persons of the World’ award for 1998 from Junior Chamber International and in 1999 was named an Australian Achiever by the National Australia Day Council. Janine has recently served on the board of the Civil Aviation Safety Authority (CASA), the youngest and only female director. She is also the patron of the Australasian Spinal Research Trust and is committed to helping find a cure for spinal cord injury in the near future.
Janine was named in the 2001 Australia Day honours list when she was appointed as a Member in the General Division of the Order of Australia.

Countless Australians have been captivated by the inspiring story of this remarkable young woman and her story of incredible courage and strength. It is a testament to the power of the human spirit and one that will move and inspire all.