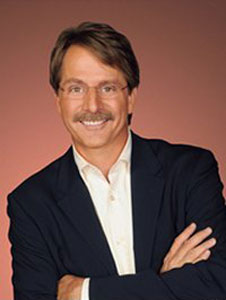 Comedian, Jeff Foxworthy , was born on September 6, 1958 in Atlanta, Georgia. Foxworthy is a stand-up comedian, actor and currently the game show host of Are You Smarter Than a 5th Grader? As a comedian, he is a member of the Blue Collar Comedy Tour, a comedy troupe which also comprises Larry the Cable Guy, Bill Engvall, and Ron White. Known for his “you might be a redneck if…” one-liners, Foxworthy has released six major-label comedy albums. His first two albums were each certified 3× Multi-Platinum by the RIAA. Foxworthy has also written several books based on his redneck jokes, as well as an autobiography entitled No Shirt, No Shoes… No Problem!.

Foxworthy has also made several ventures into television, first in the mid-1990s as the star of a sitcom called The Jeff Foxworthy Show. He has also appeared alongside Engvall and Larry the Cable Guy in several Blue Collar television specials, most notably Blue Collar TV. Since 2007, he has been the host of the quiz show Are You Smarter Than a 5th Grader? on FOX. Foxworthy also hosts a nationally syndicated radio show called The Foxworthy Countdown.

A noted hunting enthusiast, Foxworthy has appeared as host and featured guest on several programs on the Outdoor Channel.

Foxworthy has also done a lot of work supporting missionary work in Africa, specifically Kenya. He has close connections with the 410 Bridge (http://www.410bridge.org) and has put on a benefit event for them entitled “A Night For Africa” two years in a row. He has been to Kenya to provide aid on a firsthand basis.

As a supporter of the Duke University Children’s Hospital and Health Center, Foxworthy is the honorary chairman of their golf tournament. Each year he and his wife host a reception during tournament weekend and he serves as headliner and host for an evening of entertainment.

Foxworthy captured the award for “Best Stand-Up Comic” at the 1990 American Comedy Awards.

Foxworthy’s Totally Committed was released in May 1999. In conjunction with the CD was a one-hour HBO stand-up special by the same name. The CD not only reached gold status but also received a 1999 Grammy Award nomination.

In 2001, he received a nomination for Best Spoken Comedy Album at the 43rd Annual Grammys.

In 1995, he starred in The Jeff Foxworthy Show, a sitcom created out of his stand-up comedy persona. It aired on ABC, but was canceled after one season. NBC subsequently picked up the show, but it was again canceled after one season. Foxworthy later remarked that the network did not understand how to properly market his humor thinking his routine was “too Southern” for a national network (“Has anyone heard me talk?”, he commented in one of his stand-up routines), they based the first season of his sitcom in Bloomington, Indiana. The run of the show was later seen on Nick at Nite and CMT in 2005 and 2006.

Foxworthy is currently the game show host of Are You Smarter Than a 5th Grader? which airs on FOX on Fridays. He will also be hosting the syndicated version of the game show due to start in September 2009.

In the early 2000s, Foxworthy had a career resurgence as a result of the Blue Collar Comedy Tour, in which he and three other comedians (Larry the Cable Guy, Ron White, and Bill Engvall), specializing in common-man comedy, toured the country and performed for record crowds. The tour lasted three full years, constantly being extended after an initial run of 20 shows.

In 2004, he launched a new television show called Blue Collar TV on The WB Television Network, Comedy Central, and Comedy Network (2007). He serves as executive producer, and stars alongside Blue Collar Comedy Tour-mates Larry the Cable Guy and Bill Engvall. (Ron White turned the show down but made occasional guest appearances). The show was relatively successful compared to the anemic performance of the WB’s other sitcoms[citation needed]. On Larry the Cable Guy’s website, he posted that the show was canceled on October 17, 2005 by WB. Reruns of Blue Collar TV continued until the network merged with UPN to form The CW.

Foxworthy has authored several books, including You Might Be a Redneck If… (1989), as well as his autobiography, No Shirt, No Shoes, No Problem! (1996). Artist Layron DeJarnette provided illustrations for the Redneck Dictionary books. R. David Boyd has been the exclusive illustrator for most of Foxworthy’s books and album covers.

He also has released a cookbook entitled The Redneck Grill, co-authored with Newnan, Georgia artist R. David Boyd, and “Redneck Extreme Mobile Home Makeover” (2005), a book with some of his redneck jokes.

His “redneck humor” books are:

In May 2008, Jeff Foxworthy released a book entitled “How to Really Stink at Golf”, with co-author Brian Hartt and illustrations by Layron DeJarnette.