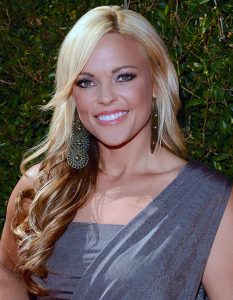 Jennie Finch was born on September 3, 1980, in La Mirada, California and grew up in a close knit family. She is the youngest of Doug and Bev Finch’s three children. Family is important to Jennie and she credits them for much of her success. Jennie’s dad, Doug, spent countless hours working with Jennie over the years. Jennie’s mom is a huge Dodgers fan, and between her love of baseball, Doug’s infinite patience and devotion, and Jennie’s two older brothers who loved to play, Jennie grew up a true blue Dodgers fan with a passion for baseball. She was excited when just after her fifth birthday her parents signed her up for her first t-ball league. She couldn’t wait to play just like her brothers, but this was even cooler because girls were doing it.

Her love for the game and competitive nature was evident from the start, as was her natural athletic ability. She had great hand-eye coordination, and she was bigger and faster than most of her teammates. She also had a cannon for an arm. During winter vacation in Iowa one year, she celebrated the first snowfall by packing a snowball and heaving it out of sight. Doug did whatever he could to accelerate his daughter’s progress. He constructed a batting cage in the backyard, and would sit for hours on an up-ended bucket while she threw to him. He even transformed a small trampoline into a pitch-back she could use on evenings when he worked late. He eventually became her personal coach.

Jennie started pitching at age eight and by the time Jennie was nine, she was playing for a 10-and-under traveling all-star team. Every weekend was spent at a different diamond somewhere in suburban Southern California. The more competitive the environment the more Jennie thrived. She hated to lose, and worked exceptionally hard to make sure it never happened. At age 12, she led the California Cruisers to the 12-and-under American Softball Association national title in Chattanooga, Tennessee. Every summer, the sport took her to a new part of the country for a national tournament. In 1995, Jennie’s ASA team captured the 14-and-under crown.