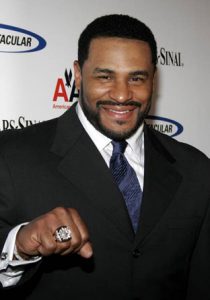 Jerome ‘The Bus’ Bettis is considered one of the best big backs of his time and was a key part of the Pittsburgh Steelers winning Super Bowl XL in 2006.

Jerome “The Bus” Bettis is considered one of the best big backs of his time and was a key part of the Pittsburgh Steelers winning Super Bowl XL in 2006.

Bettis has stayed busy since his retirement. He’s involved with a restaurant in Pittsburgh called Jerome Bettis 36 Grille. And he is busy with many philanthropic causes , including the Bus Stops Here Foundation which aids underprivileged children in addition to the “Cyber Bus” program. This makes it possible for Detroit middle and high school students to both build and use the latest computer technology.

Bettis was picked in the first round (10th overall) of the 1993 NFL draft by the-then Los Angeles Rams. In his rookie year, he rushed for 1,429 yards and was named Offensive Rookie of the Year. He rushed for over 1,000 in his second season with the Rams, but as his carries declined, he was traded to the Pittsburgh Steelers in 1996. His career took off after his move to Pittsburg making Bettis an important part of the Steelers offense.

Right after the Steeler loss in the 2005 AFC Championship game, Steelers quarterback Ben Roethlisberger mad a promise to Bettis that if he would come back for one last season, Roethlisberger would get the team to the next Super Bowl. It was this promise that got Bettis to postpone his retirement. In his first 12 NFL seasons, Bettis had reached the playoffs five times but had yet to play in the Super Bowl.

In 2006 ,the Steelers were set to battle the Denver Broncos in the AFC Championship game. Prior to the game, Bettis delivered a passionate speech to his teammates, asking them to “just get me to Detroit,” his hometown, where Super Bowl XL was to be played. His got his wish as he and his team defeated the Broncos 34-17.

After 13 seasons Bettis retired as the NFL’s fifth leading all-time rusher with 13,662 yards and 91 touchdowns. He was a six-time Pro Bowl selection. He was also named the 1996 NFL Comeback Player of the Year and, in 2002, he was awarded the recipient of the Walter Payton Man of the Year.