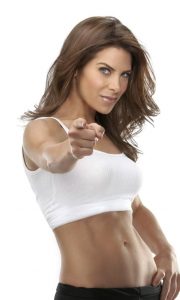 Jillian Michaels is one of the leading health and wellness experts in the country. Perhaps considered one of the most demanding people on television for her role as trainer and life coach on the two NBC hit series, The Biggest Loser and Losing It With Jillian, Michaels has created a brand name for herself. Every week she motivates nearly 13 million TV viewers of The Biggest Loser, and almost 1.5 million monthly visitors to her Web site and daily e-mail newsletter.

As a motivator and role model, Jillian has a unique connection with her audience that stems from her own personal journey toward wellness. Before she was a huge TV success, Jillian struggled with her own weight. She was determined to reach her goals – and through dedication and hard work, she did.

Jillian has been a personal trainer for 19 years. Since 1993, Jillian has held two personal training certificates from the leading certification programs in the country: the National Exercise & Sports Trainers Association (NESTA) and the American Fitness Association of America (AFAA), as well as a kettlebell certification from KettleBell Concepts. In addition, she has developed a continuing education series for trainers with AFAA.

She is a New York Times bestselling author of three books, The Master Your Metabolism Cookbook, Master Your Metabolism and Making the Cut, and is also the author of Winning by Losing. Jillian’s new book, Unlimited: How to Build an Exceptional Life, released in April 2011. Her DVDs, 6 Week Six-Pack, Shred It With Weights, Yoga Meltdown, 30-Day Shred, No More Trouble Zones, and Banish Fat Boost Metabolism, are consistently top sellers, and her website, JillianMichaels.com, enjoys tremendous success because of people who look to Jillian for a comprehensive online wellness program.

Jillian launched Empowered Media, LLC, with the goal of creating total life solutions for people that involve all aspects of living well, including health, wellness, weight loss, and overall lifestyle. By imparting to her clients a unique and inspiring philosophy that stresses the integration of fitness, nutrition, and behavioral changes, Jillian empowers the people she works with to define and reach their personal goals, both physical and psychological. Empowered Media allows Jillian to communicate her message of health and wellness to a large audience through different media, including an online community, books, DVDs, gaming, and exercise equipment. The company will work toward its objectives with a circle of experts who collaborate with Jillian to act as life architects, helping people to restructure their lives. The company’s motto is, ”Inspired by Jillian, empowered by YOU!”

Jillian lives in Los Angeles. When she’s not on set for TV, she enjoys traveling and getting involved in charitable activities, which include her work as an ambassador for the American Cancer Society.