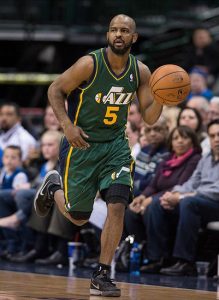 Point Guard for the Utah Jazz

John Lucas III was born November 21, 1982 and is an American professional basketball player for the Chicago Bulls.

In 2005, after failing to get drafted by an NBA team, Lucas signed a contract to play with the Minnesota Timberwolves Summer League team. The Timberwolves also signed him to their training camp roster. In the regular season, Lucas was a member of the Houston Rockets for two games before being waived. He was successfully signed after the NBA granted permission to Rockets management to add to their depleted roster due to an overflow of injuries. Lucas’s call-up made him the first Tulsa 66ers player to be called up from the NBA Development League. He averaged 16.6 points in 33.2 mins per game with the 66ers.

On May 10, 2006, Lucas signed with Snaidero Udine of the Italian League, to fill the gap left by Jerome Allen, who was out for the season due to injury. On July 28, 2006, Lucas signed with the Rockets to a three-year contract. In the 2006-07 season, Lucas and the Rockets made it to the playoffs, where they lost to the Utah Jazz in the first round, in 7 games. On October 30, 2007, Lucas was one of four players cut from the Rockets’ roster, prior to the commencement of the 2007-08 season.

His NBA career highs consisted of 13 points, 5 rebounds, 4 assists and 4 steals, and he subsequently returned to Italian basketball, joining Benetton Treviso. He was then later released by Treviso during that same 2007-08 season. Lucas was signed by the Oklahoma City Thunder in September 2008, and he was released by them in November before playing in any NBA games for them. He then played the 2008-09 NBA D-League season with the Colorado 14ers, whom he helped lead to the D-League championship. On April 27, 2009, Lucas signed with TAU Cer&;Atilde&;iexclmica of the Spanish ACB League for the remainder of the season.
On September 2, 2009, Lucas was drafted by the Maine Red Claws in the NBA Development League expansion draft.

Lucas played in the 2009 NBA preseason for the Miami Heat. He played four games and averaged 7.0 points, 2.3 assists and 1.3 rebounds in 12.5 minutes per game. On October 23, 2009, Lucas was waived by the Heat.
Lucas then spent the 2009-10 season with the Shanghai Sharks of the CBA.
He spent the 2010 NBA preseason with the Chicago Bulls, but was waived on October 21. The Bulls re-signed Lucas on November 26. In his debut for the Bulls, Lucas missed two critical free throws in the final seconds of a 98-97 loss to the Denver Nuggets. He was waived on January 4, 2011, but re-signed with the Bulls on March 20, 2011. On January 11, 2012, Lucas received his first-ever NBA start and achieved a career-high of 25 points, leading the Bulls in a 78-64 win over the Washington Wizards. He also played 45 minutes, made 11 of 28 field goal attempts, and had 8 assists and 8 rebounds (all career-highs).
Lucas currently plays as Point Guard for the Utah Jazz.