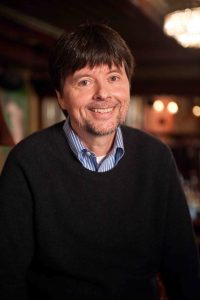 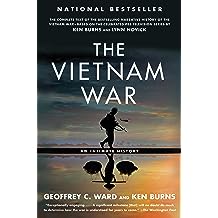 Ken Burns has been making films for more than thirty years. Since the Academy Award nominated Brooklyn Bridge in 1981, Ken has gone on to direct and produce some of the most acclaimed historical documentaries ever made. The late historian Stephen Ambrose said of his films, “More Americans get their history from Ken Burns than any other source.” A December 2002 poll conducted by Real Screen Magazine listed The Civil War as second only to Robert Flaherty’s Nanook of the North as the â€œmost influential documentary of all time,â€ and named Ken Burns and Robert Flaherty as the â€œmost influential documentary makersâ€ of all time. Ken’s films have been honored with dozens of major film awards, including seven Emmy Awards and two Oscar nominations.

The recipient of more than twenty honorary degrees, Ken has delivered many treasured commencement addresses and is a sought after public speaker, appearing at colleges, civic organizations and business groups throughout the country.

In September 2007, PBS broadcast “The War,” co-produced and co-directed by his long-time colleague, Lynn Novick. This seven-part film tells the story of the Second World War through the personal accounts of nearly 40 men and women from four quintessentially American towns. The series explores the most intimate human dimensions of the greatest cataclysm in history a worldwide catastrophe that touched the lives of every family on every street in every town in America. Robert Bianco of USA Today said, â€œThere are works of TV art so extraordinary all you can do is be grateful. With The War, gratitude abounds.â€ Keith Olbermann of NBC/MSNBC said, â€œThis is the finest documentary series of the last decadeâ€¦ if not more,â€ and Adam Buckman of the New York Post, has said â€œI have spent the better part of my adult life watching TV for a living, and I have never experienced anything more powerful than this.â€?

Ken is also producing and directing a major series on the history of the National Parks, focusing on the ideas and individuals that helped propel into existence what the writer Wallace Stegner once called “America’s best idea.” This six-part film will air on PBS in 2009. He is also working on a history of Prohibition and an update to his 1994 epic Baseball.

In January of 2005, Unforgivable Blackness: The Rise and Fall of Jack Johnson, a two-part film on the life of the first African-American heavyweight boxing champion, aired on PBS. It was produced with Ken’s long-time collaborator and editor Paul Barnes, and had its premiere at the 2004 Telluride Film Festival. This film won three Primetime Emmy Awards: Outstanding Nonfiction Special, Outstanding Writing for Nonfiction, and Outstanding Voice-over Performance (for narrator Keith David). Todd McCarthy of Variety called it â€œ…irresistibly engrossing…masterly… a knockout…â€ while The New York Times described it as â€œmonumental…gripping.â€ Ring Magazine, â€œthe bible of boxing,â€ said Unforgivable Blackness is â€œ…the most wildly entertaining documentary ever.â€

Horatio’s Drive: America’s First Road Trip, an account of the first cross-country trip by automobile, was co-produced with Ken’s long-time colleague Dayton Duncan. This film aired on PBS in October of 2003, and was screened that same year at the Telluride Film Festival. The film earned the 2003 CINE Golden Eagle Award and, in 2004, the Christopher Award. David Bianculli of the New York Daily News said, â€œThis is one drive on which no passenger will be asking impatiently, â€˜Are we there yet?’ The jouney, in this case, is the destination.â€ Mark Sachs of the Los Angeles Times wrote, â€œThe detail work by Burns and Duncan offers such an authentic-feeling trip back in time that it’s as if viewers have a backseat perch as Jackson puts his cherry-red Winton touring car in gear and heads east.â€

Mark Twain, a two-part, four-hour portrait of America’s funniest and most popular writer, was also co-produced with Dayton Duncan. Winner of the Leon Award for Best Documentary at the St. Louis Film Festival in 2001, the film aired on PBS in January 2002. Ken Ringle of The Washington Post wrote, â€Mark Twain is not only fascinating, funny, inspiring and wise, it’s one of the best primers on American literature and culture you could have.â€

In January 2001, Jazz, the third in Ken’s trilogy of epic documentaries, which began with The Civil War and continued with Baseball, was broadcast on PBS. Co-produced with Lynn Novick, this 19-hour, ten-part film explores in detail the culture, politics and dreams that gave birth to jazz music, and follows this most American of art forms from its origins in blues and ragtime through swing, bebop and fusion. Jack Newfield of the New York Post said, “Jazz is the best American documentary film I have ever seen. Period.” Tom Brokaw wrote, “Jazz is a masterpiece of American television.” John Carmen of the San Francisco Chronicle wrote, “Jazz informs, astonishes, and entertains. It invites joy, tears, toe-tapping, pride, and shame and maybe an occasional goose bump.”

Not For Ourselves Alone: The Story of Elizabeth Cady Stanton and Susan B. Anthony, winner of the prestigious Peabody Award and an Emmy Award, was co-produced with Paul Barnes and aired on PBS in November of 1999. This dual biography tells the story of the two women who almost single-handedly created and spearheaded the women’s rights movement in America, changing for the better the lives of a majority of American citizens. As Bob Herbert of The New York Times stated: “The latest splendid effort from…Ken Burns is about two women who barely register in the consciousness of late-20th century America, but whose lives were critically important to the freedoms most of us take for granted.” The 2000 Peabody Award citation for NFOA reads: “Remarkable…It is an inspiring story of hopes, dashed dreams and dogged determination…NFOA…brings heart, soul and considerable poignancy to the stories of these two leaders of the women’s suffrage movement.”

Frank Lloyd Wright, co-directed and produced with Lynn Novick, premiered at the Sundance Film Festival in January 1998, and aired on PBS in November of that year. The film, which tells the riveting story of America’s foremost architectural genius, is, according to Janet Maslin of The New York Times, a “towering two-and-one-half-hour(s)…sure to have a high profile because of the turbulent, colorful life of the architect and the austere magnificence of his work, which is thoughtfully assessed.” Kenneth Turan of the Los Angeles Times says the film “…has the unbeatable combination of exceptional interview material and beautiful architectural photography put at the service of an astonishing life.” In 1999, it won the Peabody Award.

In November 1997, Lewis and Clark: The Journey of the Corps of Discovery was released to critical acclaim and garnered the second-highest ratings in Public Television history. This four-hour film, co-produced with Dayton Duncan, chronicles the corps’ journey westward on the first official expedition into uncharted spaces in United States history. Tony Scott of Weekly Variety called the film “…a visually stunning account…Striking photography, superb editing, informative reportage and little-known anecdotes characterize the latest fine documentary work from Burns,” and Don Heckman of the Los Angeles Times wrote, “…superb…a vast landscape that, even on the television screen, underscores the sense of awe reported by Lewis and Clark in their journals.”

Thomas Jefferson, a three-hour portrait of our third president, aired in February of 1997. This film explores the contradictions in the man who was revered as the author of the most sacred document in American history and condemned as a lifelong owner of slaves. Walter Goodman of The New York Times said: “…Thomas Jefferson is a considerable accomplishment, a thoughtful and affecting portrait of the intellectual who captured the essence of a new nation’s hopes in phrases that continue to resound around the world.” And George Will, in The Washington Post, said: “…Ken Burns presents a timely corrective, a visually sumptuous and intellectually judicious appraisal of Jefferson.”

In the fall of 1996, The West, an eight-part, 12 1/2 hour film series on the American west was released. The West is the story of one of the great crossroads in human history, a place where, tragically and heroically, the best of us met the worst of us and nothing was left unchanged. Ken Burns was executive producer and creative consultant for this highly praised series, directed by Stephen Ives, which won the 1997 Erik Barnouw Prize.

Ken Burns was the director, producer, co-writer, chief cinematographer, music director and executive producer of the Public Television series Baseball. Four and a half years in the making and eighteen and a half hours in length, this film covers the history of baseball from the 1840s to the present. Through the extensive use of archival photographs and newsreel footage, baseball as a mirror of our larger society was brought to the screen over nine nights during its premiere in September 1994. It became the most watched series in PBS history, attracting more than 45 million viewers. David Bianculli of the New York Daily News said, “[Baseball]…resonates like a Mozart symphony.” Richard Zoglin of Time magazine wrote, “Baseball is rich in drama, irresistible as nostalgia, and…an instructive window into our national psychology.” Baseball received numerous awards, including an Emmy, the CINE Golden Eagle Award, the Clarion Award, and the Television Critics Awards for Outstanding Achievement in Sports and Special Programming.

Ken Burns was also the director, producer, co-writer, chief cinematographer, music director and executive producer of the landmark television series The Civil War. This film was the highest rated series in the history of American Public Television and attracted an audience of 40 million during its premiere in September 1990. The New York Times called it a masterpiece and said that Ken Burns “takes his place as the most accomplished documentary filmmaker of his generation.” Tom Shales of The Washington Post said, “This is not just good television, nor even just great television. This is heroic television.” The columnist George Will said, “If better use has ever been made of television, I have not seen it and do not expect to see better until Ken Burns turns his prodigious talents to his next project.” The series has been honored with more than forty major film and television awards, including two Emmy Awards, two Grammy Awards, Producer of the Year Award from the Producer’s Guild, People’s Choice Award, Peabody Award, DuPont-Columbia Award, D.W. Griffiths Award, and the $50,000 Lincoln Prize, among dozens of others.

In 1981, Ken Burns produced and directed his first film for PBS, the Academy Award nominated Brooklyn Bridge. During the 1980s he made several other award-winning films, including The Shakers Statue of Liberty, also nominated for an Oscar Huey Long, the story of the turbulent southern dictator, which enjoyed a rare theatrical release The Congress Thomas Hart Benton, a portrait of the regionalist artist and Empire of the Air: The Men Who Made Radio. Ken Burns has also produced and directed three films – William Segal, Vézelay, and In The Marketplace – which explore the questions of seeing, searching and being through the work and teachings of philosopher and painter William Segal.

Ken was born in Brooklyn, New York, in 1953. He graduated from Hampshire College in Amherst, Massachusetts, in 1975 and went on to be one of the co-founders of Florentine Films.