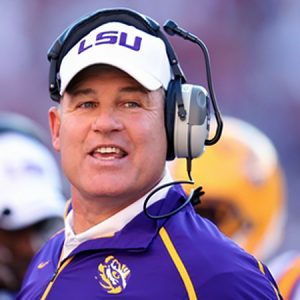 Les Miles accepted the challenge, and in two years at the helm, he’s advanced every facet of the LSU football program.

Whether it be on the field, in the classroom, or in the community, Miles demands his players to strive for excellence and pursue an education while representing the University in first class fashion. The response by the players has been overwhelming as they’ve posted back-to-back 11-win seasons, played an instrumental role in the recovery efforts following Hurricanes Katrina and Rita, while also achieving academic success in the classroom. In two years, LSU’s had 37 players earn SEC Academic Honor Roll status with another 34 earning their college diploma.

Of the 24 seniors on this year’s team, two have already graduated with another 13 scheduled to graduate following the 2007 fall semester. The remaining nine are on pace to graduate either in the spring or summer of 2008.

On the field, the Tigers have produced 12 NFL Draft picks over the past two years, including a school-record four first round picks in the 2007 draft.

Now, as Miles enters his third year with the Tigers, the foundation for LSU football is more stable than ever. After 22 wins, including eight over foes ranked among the nation’s top 25, and with back-to-back consensus top five recruiting classes, Miles and the Tigers have solidified their standing as one of college football’s premier programs.