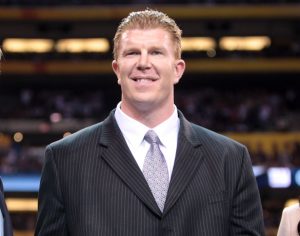 Superbowl Champion, 2011 NFL Man of the Year and Founder of the Hike Foundation

Matt Birk grew up in St. Paul, Minnesota and attended Catholic elementary and high school. He was a Cub Scout, a member of the National Honor Society, and played “pretty much every sport there was to play.” After high school, Matt attended Harvard University and earned a degree in Economics. While playing for the Harvard Crimson, he received several football honors, including All-Ivy League and Division I-AA All-American.

Matt was selected by the Minnesota Vikings in the sixth round of the 1998 draft. Appearing in 228 career games, including 18 playoff contests, Matt spent 11 seasons with Minnesota and 4 more with the Baltimore Ravens. He was named the 2011 Walter Payton NFL Man of the Year for his off-the-field service, as well as his playing excellence.

Matt has a passion for children and education, and has focused a great deal of his energy on promoting literacy among the youth in his communities. In 2002, he created the H.I.K.E. Foundation (Hope, Inspiration, Knowledge, Education) in Minnesota. It has grown greatly since then and its initiatives reached over 100,000 children in the Baltimore area in 2012.

In February, 2013 after a 15 year career in the NFL and a Super Bowl XLVII win with the Baltimore Ravens, the six-time Pro Bowl Center announced his retirement from playing football. In August, 2014 Matt accepted a position in New York with the National Football League as their Director of Football Development.

Today, in addition to his work for the NFL, Matt Birk is inspiring, teaching and motivating audiences across America as a national speaker who has long lines waiting to shake his hand the moment comes off the stage. He speaks on the topics of Leadership, Teamwork, and Success. His personality connects with every attendee, his humor brings laughter to the ballroom, and his information is memorable and applicable.