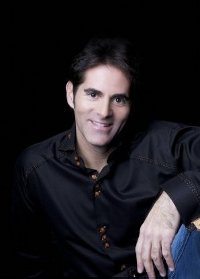 Don’t call Michael Garfield a Techno Geek. You may want to try Technology Evangelist. If it beeps, chirps, buzzes or uses a remote control, chances are that Michael has it or certainly knows about it. No wonder he’s known as ”The High-Tech Texan.” As the technology and Web expert for several media outlets in Texas, and on the Web, Michael keeps up with the newest technology with a passion. He began his broadcasting career in the late 1990’s on KPRC-TV (NBC) and now hosts syndicated segments across a dozen U.S. markets. Michael has also conquered the radio industry – providing industry news and insight to radio stations in Houston and other cities across the country. Michael hosts a weekday radio program on The 9-5-0 (KPRC-AM) in Houston and the long-running ”The High- Tech Texan Show with Michael Garfield” on Saturdays featuring industry guests, listener call-ins, product reviews, tips and opinions. As a key figure in the technology industry, Michael regularly appears at conferences and across the media to speak about the Internet, issues that affect cyberspace and the paradigm shift of using new technology and products to better peoples’ lives. Recent media appearances include CNBC, FOX and various CBS and ABC affiliates. When not professing the virtues of tech products, Michael runs the Garfield Internet Group, a consulting firm focusing on the emerging trends in the Internet industry. His company specializes in several areas including business development, e-commerce, marketing strategy, promotion and branding of Internet sites. Their client list includes media companies, web start-ups and non-profit organizations. Before forming Garfield Internet Group, Michael was the Business Development Manager for Microsoft’s Sidewalk.com project. Hired to launch Microsoft’s local online guide in the Houston market, he oversaw the business and marketing duties for four Sidewalk markets including Houston, Dallas, Orlando and Miami. His accomplishments in the online industry include the successful launch of these web sites and the sustained marketing efforts in each market. He led the consumer advertising campaigns that included both online and offline media exposure. Michael led several key initiatives of Sidewalk’s national content and marketing efforts including the formation of a nationwide network of live web cameras. Prior to his experience with Microsoft, Michael gained experience in the communications, marketing and promotion areas with companies like MCI, Bank One and ProServ Sports Management. But it was his first job out of college that propelled his drive to evangelize products in front of masses. Hired in 1989 as one of the youngest TV Show Hosts on QVC Network, Michael honed his skills as a product pitchman guiding viewers across the nation through products like fine jewelry, hardware, household items and – of course – electronics. Michael is a graduate of the University of Texas at Austin and holds a bachelors degree in Communications, Radio-TV-Film. He works diligently in the community as a speaker and emcee and currently sits on the Board of Directors of the Houston Technology Center, Downtown Houston YMCA, Leadership Houston and the University of Houston College of Technology. He also served on the 2004 Super Bowl Host Committee and Men’s Masters Tennis Championship Committee. An Eagle Scout, Michael lives in Ft. Bend County with his wife, Carrie, and three sons.