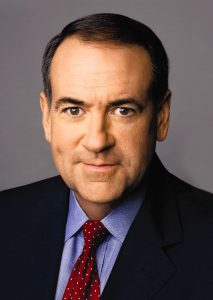 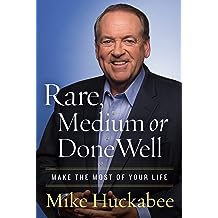 Former Arkansas governor Mike Huckabee is the host of the number one rated weekend hit HUCKABEE on the Fox News Channel and Cumulus Media Networks’ syndicated radio program, The Mike Huckabee Show, heard on more than 175 stations. He’s also heard three times daily across the nation on The Huckabee Report syndicated on almost 600 stations, and has been the fastest growing new program on the Cumulus Media Network in recent years.

He is the author of 9 books, the most recent being ”A Simple Government.” This is his fourth book that has been on the New York Times Best Seller list joining ”Do the Right Thing,” ”A Simple Christmas” and ”Can’t Wait Till Christmas.” After his campaign for the Republican nomination for President in 2008, in which he finished second to John McCain, he formed HuckPac to assist Conservative Republicans running for office nationwide and has amassed a volunteer team with thousands of activists in all 50 states.

From 1996-2007, Huckabee served as the 44th Governor of Arkansas and was recognized nationally for his leadership, having been honored by several renowned publications and organizations for his numerous accomplishments. Governing magazine named him as one of its ‘Public Officials of the Year’ for 2005, Time Magazine honored him as one of the five best governors in America, and later in the same year, Huckabee received the American Association of Retired Person’s Impact Award. In 2007, he was presented with the Music for Life Award by the National Association of Music Merchants (NAMM), for his commitment to music education. He served as the Chairman of the prestigious National Governors Association as well as the Education Commission of the States and the Interstate Oil and Gas Commission.

Huckabee became governor in July 1996 when his predecessor resigned. He was one of the youngest governors in the country at the time. Huckabee was elected to a full four-year term as governor in 1998, attracting the largest percentage of the vote ever received by a Republican gubernatorial nominee in Arkansas, and was re-elected to another four-year term in November 2002.

Huckabee first was elected lieutenant governor in a 1993 special election and was elected to a full four-year term in 1994. He was only the fourth Republican to be elected to statewide office since Reconstruction.

After an early career in broadcasting and advertising, he spent 12 years as a pastor and denominational leader. He became the youngest president ever of the Arkansas Southern Baptist State Convention, the largest denomination in Arkansas. Huckabee led rapidly growing congregations in Pine Bluff and Texarkana. He said those experiences gave him a deep sense of the problems faced by individuals and families.

Huckabee’s efforts to improve his own health have received national attention. Diagnosed with Type 2 diabetes in 2003, he lost 110 pounds. Barely two years later, he completed four marathons: The 2005 and 2006 Little Rock Marathons, the Marine Corps Marathon and the ING New York City Marathon. As a result of his accomplishments, The Road Runners Club of America named him its ‘Southern Region Runner of the Year’ and USA Track & Field has named him their ‘Athlete of the Week’ for the country.

Huckabee, 56, is an avid musician and is bass player in his rock-n-roll band, Capitol Offense, which has opened for artists such as Willie Nelson and the Charlie Daniels Band, and has played the House of Blues in New Orleans, the Red Rocks Amphitheater in Denver, CO, for two presidential inauguration balls and at two Republican National Conventions. He is featured each week in the musical segment of his Fox show with the Fox house band, The Little Rockers.

His hobbies include hunting, fishing, running, and music. He was named one of the 25 Most Influential People for Conservation by Outdoor Life magazine, and was named Man of the Year by the American Sportfishing Association in 1997.

The former governor and his wife, Janet, live in Florida and still spend part of their time in Arkansas. They have three grown children: John Mark, David and Sarah, as well as two grandchildren, Chandler and Scarlett, for whom his most recently released book, ”Dear Chandler, Dear Scarlett” is named.