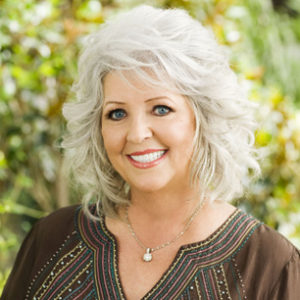 A lively, southern woman with piercing blue eyes and an infectious laugh, Paula Deen is proof that dreams really do come true. With best-selling cookbooks, a lifestyle magazine, and not one, but two hit shows on the Food Network, it’s easy to see there is no stopping this woman’s success.

Deen is the author of Paula Deen Celebrates! Paula Deen & Friends: Living It Up, Southern Style The Lady & Sons Just Desserts and other books. She is the host of the Food Network’s Paula’s Home Cooking and Paula’s Party, and has appeared on Good Morning America, Today, Fox and Friends, and The Oprah Winfrey Show. She is also the mastermind behind the Cooking with Paula Deenmagazine that boasts a circulation of 1.3 million and is considered a category leader.

She is also the founder of The Lady & Sons restaurant and co-owner of Uncle Bubba’s Oyster House.