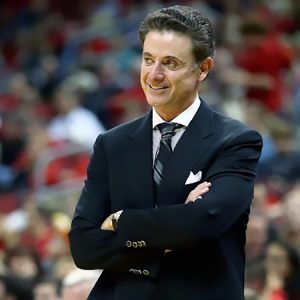 Rick Pitino’s name is synonymous with excellence in college basketball. His collegiate coaching experience includes stints at Boston University (1978-83), Providence College 1985-87), University of Kentucky (1989-97) and his current position at the University of Louisville (2001-present). Pitino also coached in the NBA with the New York Knicks (1987-89) and Boston Celtics (1997-2001).

Pitino guided all four collegiate teams to impressive records, including a NCAA Championship at Kentucky in 1996. Pitino also holds the distinction of being the only men’s coach in NCAA history to lead three different schools to the Final Four: Providence, Kentucky and Louisville.

Pitino’s first NBA head coaching job came with the New York Knicks in 1987. He had previously been an assistant from 1983-1985. Within two years of becoming head coach, Pitino led the previously struggling Knicks to their first division title in nearly twenty years.

Pitino was born September 18, 1952, in New York. He is a 1973 graduate of the University of Massachusetts, where he played collegiately.

In addition to his basketball accomplishments, Pitino is a sought-after motivational speaker and successful author, having published “Success is a Choice: Ten Steps to Overachieving in Business and Life” and “Lead to Success”. “Success is a Choice” presents readers with strategies to build self-esteem, set goals, stay positive, thrive under pressure and learn from adversity.