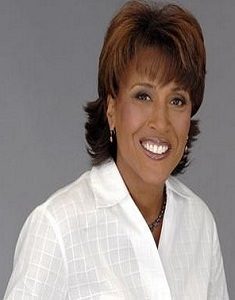 Roberts noted on the January 13, 2007 edition of Costas on the Radio that she was offered a scholarship to play basketball at Louisiana State University, but thought the school too big and impersonal after visiting the campus. On her way back to Pass Christian from that visit, she saw a road sign for Southeastern Louisiana University, stopped to visit and decided to enroll. The only scholarship left was a tennis scholarship and she was promised that there would be a journalism scholarship by the time she would graduate. She went on to become a standout performer on the women’s basketball team, ending her career as the school’s third all-time leading scorer (1,446 points) and rebounder (1,034). She is one of the only three Lady Lions to score 1,000 career points and grab 1,000 career rebounds. During her senior season, she averaged a career-high 15.2 points per game.

In the fall of 2005, Roberts anchored a series of emotional reports from the Mississippi Gulf Coast after it was devastated by Hurricane Katrina her hometown of Pass Christian was especially hard hit, with her old high school completely reduced to rubble.

Roberts has earned three Emmy Awards for her sportscasting work at ESPN.

On July 31, 2007 Robin Roberts announced during the live broadcast of Good Morning America that she had been diagnosed with an early form of breast cancer. She noticed a lump through self-examination the day they were working on Joel Siegel’s farewell on Good Morning America (Siegel died from colon cancer). Roberts underwent surgery August 3, and on August 9 ABC News announced she was planning to return to the anchor desk on Monday, August 13.

Roberts announced on the The Ellen DeGeneres Show on September 5, 2007 that she is healthier now than before the cancer but still faces future treatment. She also revealed that a mammogram did not detect her cancer but a follow-up ultrasound did. Roberts shaved her head during chemotherapy treatment. She wore a wig on Good Morning America because she “didn’t want to distract viewers from the news.” On April 21, 2008 Roberts stopped wearing the wig.

As of January 10, 2008 Roberts had completed her eight chemotherapy treatments. She then had 6 1/2 weeks of radiation treatment, which was completed as of March 28, 2008.