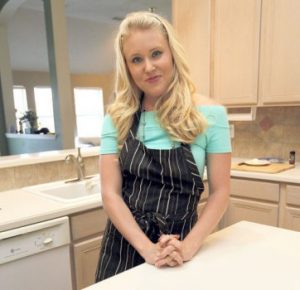 Sarah Penrod is a born and bred Texan from Denton, Texas. After a childhood in musical theater, country music, and the arts Sarah decided to take the advice of a close friend who told her, ”All you do is read cookbooks, cook, and spend all of your money on exotic ingredients that no one has heard of . . . go become a chef.”

Sarah graduated from Scottsdale Culinary Institute in 2009. After spending some time cooking at the 4 star restaurants on the Riverwalk, she opened her own personal chef company. Within months she was auditioning for Tony Parker and Eva Longoria and became their private chef.
In 2010, Sarah was invited to the White House by Michelle Obama for the launch of the Chefs Move to School Initiative. She subsequently began appearing on Great Day SA and other cooking show segments. Sarah spent a lot of time educating the public on healthy cooking and overcoming children’s obesity through encouraging a whole food diet. She also expanded her personal chef business into a full catering operation and began cooking for an exciting array of private events deep in the Texas Hill Country.

In 2012, Sarah relocated to the Bay Area Houston area. A place where she’d spent her childhood summers.

”I’ve never been happier than when I was in the Houston-Galveston area,” said Sarah. ”My best memories are on those beaches.”

In Houston, Sarah quickly got to work forming a competition gumbo team, Merlotte’s Vampire Gumbo, and began winning trophies at their first cook-off.

In 2013, Sarah began producing her own web series, ”Let’s Eat Houston.” Sarah explored the area in-depth. She used her acquired knowledge to inform the boom of new Houstonians, moving to the area for business, where they could find the best eats.

The first episode of Let’s Eat Houston was in post production when Sarah got a call from Food Network informing her that she had been cast as one of 12 finalists for the 10th season of Food Network Star.

The adventure continued on June 1st, 2014, as Sarah began battling 12 other hopefuls for her own show on Food Network, bringing some Texas sass to the party!