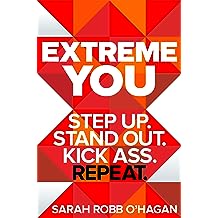 Executive, activist and entrepreneur, Sarah Robb O’Hagan is described by the media as everything from “Superwoman undercover” to the “Queen of the Jocks” to the ultimate example of where fierce business woman, mother and fitness fanatic combine. Named among Forbes “Most Powerful Women in Sports” and recognized as one of Fast Company’s “Most Creative People in Business” Sarah is an internationally recognized re-inventor of brands, but if you ask Sarah, she’ll say she’s in business to help individuals and teams achieve their potential.

Sarah was born in New Zealand – the first country in the world to give women the vote and home to the first man to climb Mt Everest. The pioneering spirit of her country cultivated Sarah’s drive and imagination for “what’s possible” enabling her to found a movement she currently leads called “Extreme Living” – helping individuals, teams and businesses unlock their potential by discovering their own uniquely exploitable traits. Her book EXTREMEYOU will be published by HarperCollins early next year.

Sarah’s career includes leadership roles at some of the world’s most iconic brands – including Virgin, Nike, Gatorade, and Equinox the world’s premier fitness lifestyle company, where as President she led the transformation of the business from bricks and mortar health club to an “always on” fitness lifestyle partner heavily enabled by technology and proprietary content through the creation and launch of the editorial content platform “Furthermore from Equinox”.

Prior to Equinox Sarah served as Global President of Gatorade where she was widely known for transforming the business from a declining sports drink into a sports performance innovation company serving nutrition solutions to athletes of all levels. As described by Fast Company magazine, Sarah inherited a “flaming mess” when she took over the legendary Sports Drink in 2008, but through a courageous transformation that involved flying in the face of a deeply ingrained PepsiCo culture that had watered down the brand’s true positioning, Sarah and her team took the Gatorade brand back to its roots, and then reimagined its future for a new audience of young, digitally savvy athletic teens.

Sarah’s career in the sports industry began at Nike where she was a key member of the team that launched the game changing innovation called Nike Plus, in collaboration with Apple. This was the world’s first digital-tracking device for runners that created a global social collaboration platform for fitness enthusiasts and in many ways birthed the fast- growing technology movement now known as the “Quantified Self.”

Sarah started her career in the airline industry as a marketing executive at her country’s national airline, Air New Zealand. In the early 90s she moved to Virgin Atlantic Airways where she became known for her breakthrough marketing campaign in collaboration with the Austin Powers movie where she rebranded the airline “Virgin Shaglantic” for a number of weeks, launched the world’s largest internet “event” for its time, and turned a 747 into a flying showcase of the entire initiative.

Sarah is a passionate advocate for an active lifestyle and believes the lessons learned from sports and fitness can be applied to improve performance in the work place. She has served on Hillary Clinton’s US State Department Council to Empower Women and Girls through Sports, and is a trustee of the Women’s Sports Foundation. She is also an active member of the World Class New Zealand Network, as she remains committed to helping the country’s development, international competitiveness and economic growth.

Throughout her career Sarah has been recognized for her many achievements. Recent honors include being named among Forbes magazine’s “Most Powerful Women in Sports” (2015 and 2009), being designated one of the “Most Creative People in Business” by Fast Company (2012), and being named to the top 40 Under 40 lists by the Sports Business Journal (2009, 2011, and 2012), Sports Goods Business (2010), and Crain’s Chicago Business (2010). and Ad Age magazine’s “Women to Watch” (2010). In 2014 Sarah was awarded the Sir Peter Blake Trust Award for outstanding leadership.

Sarah and her husband, Liam, and sons Sam and Joe and daughter Gabby live in New York. They also have a chocolate Labrador named Edmund “Eddie” Hillary.