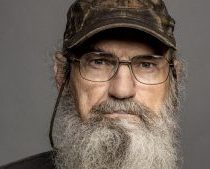 Silas Robertson, also known as “Uncle Si,” is Phil’s brother, best friend, and partner-in-crime. Si can be seen on almost every Duckmen DVD as well as the hit A&E Duck Dynasty television show. Si has worked and hunted for Duck Commander since retiring from the United States Army in 1993. One of his primary responsibilities is fashioning the reeds that are inserted in Duck Commander duck calls. This Vietnam veteran often shares his war stories with the guys in the warehouse, which – much to Willie’s dismay – usually gets the crew behind schedule. When Si is not working in the warehouse, he is working on the family land preparing for the next duck season with Phil. Of course, when duck season rolls around, you’ll find him in a blind. Si has proven to be one of the most popular characters on Duck Dynasty. If you haven’t grown to love Si yet, you haven’t watched him enough. You can learn all about “America’s Favorite Uncle” in his New York Times bestselling book, Si-Cology 1.

Si currently resides in West Monroe, La. with his wife, Christine. They have two grown children, Trasa and Scott, who each have four sons, for a grand total of eight grandsons.