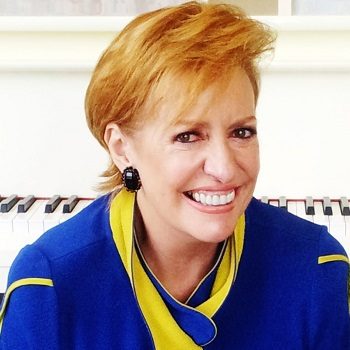 Australian born Theresa Behenna is an award winning motivational speaker, internationally acclaimed entertainer (who is paid NOT to sing) author, emcee, recording artist and totally unrelated to Olivia Newton John. Laid off from her office job during a recession Down Under, Theresa began playing piano anywhere that paid money or free food and ended up touring the world. Armed with a positive attitude, a passion for performance and thirty one evening dresses, she has appeared in some of the world’s most prestigious venues before celebrities such as Andrew Lloyd Webber, Matt Lauer, Elton John, Princess Grace, ”James Bond” and President Bush. In 2006 Coca Cola chose her to perform at the Winter Olympics in Italy where she became the world’s only pianist to bring back a gold medal. (No kidding, she has photos!)

After moving to Texas, Theresa combined her background as a secretary, musician and business owner with popular songs, Aussie humor and a motivational message that launched her speaking business. Using mastery of the piano as parallel principles for success, she has inspired, entertained and motivated thousands of people at conferences and meetings throughout the country. With a firm belief that ”great leadership starts with self leadership, ” Theresa’s compelling stories and practical strategies help audiences reach their own level of extraordinary performance to live and work better.

Her universal appeal has resulted in a wide range of clients from the health care industry to real estate, women’s groups to credit unions, educators to the energy field, associations and corporate giants like British Petroleum that wrote (before the spill): ”You really connected with our group of senior managers at an emotional level and made a lasting impression. I particularly liked that you tailored your work to our needs for our mastery training event. Many commented on your amazing piano skills!” (Obviously they need a teensy more training in other areas…?)

As a professional member of the National Speakers Association, Theresa won the John Wolfe Award for speaking excellence in 2007. A contributing author to the anthology ”Rekindling the Human Spirit”, she’s written numerous articles, way cool blogs and currently writes a fun ‘n’ fab newsletter that puts a smile in the day of many. Her top selling piano CD ”Songs for Friends” was recorded in 2001 with a second album soon to be released.

Theresa resides in Houston where she has yet to sound like a native Texan. She is single (but hopeful) with no children, no pets, no worries.