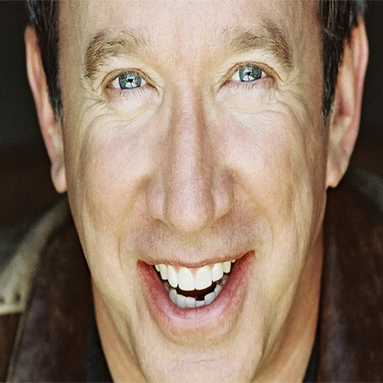 Before becoming the power-tool-wielding star of the top-rated sitcom Home Improvement, Tim Allen suffered through comedy-club obscurity, Mr. Goodwrench commercials, prison, and even a job in advertising. Born Tim Allen Dick in Denver, Colorado, Allen has claimed that his personality was shaped by his easily-mocked surname–self-deprecation became his only defense in the face of the persistent taunting of his peers. (He wisely lopped off the offending name before joining the nightclub circuit–there’s only so much heckling a man can take.) In 1964, when he was just eleven years old, Allen suffered a shattering loss when his father was killed in a car accident. His mother married her high-school sweetheart two years later (he had lost his wife to an auto accident as well), and the family relocated to a suburb of Detroit, Michigan, where Allen finished out high school and then went on to earn a degree in television production from Western Michigan University.

Allen first took to the comedy stage on a dare by one of his friends, and found he had a talent for eliciting guffaws. He set about honing his act at night, while supporting himself by appearing in commercials for Mr. Goodwrench, Ford, Chevrolet, and Kmart during the day. As his reputation as a comedian grew, Allen retooled his act–which formerly relied heavily on scatology–into a grunt-punctuated routine called “Men Are Pigs,” which focused on men’s love of hardware. The material quickly caught on, and before long, Allen succeeded in packaging it for a 1990 Showtime special of the same title. The special came to the attention of Walt Disney Studios then-chairman Jeffrey Katzenberg just about the time he was looking to develop a new television series. Katzenberg and Walt Disney Co. chairman Michael Eisner tracked down Allen backstage at one of his Improv gigs, and offered him starring roles in a series of situation comedies in development. Allen declined proffered roles in the series Turner & Hootch and The Dead Poets Society, in which he would have recreated for the small screen characters made popular on the big screen by Tom Hanks and Robin Williams. Eventually, he succeeded in persuading the studio to use his “Men Are Pigs” routine as the basis for a sitcom, and Home Improvement was born.

The pilot for Home Improvement introduced viewers to Tim Taylor, befuddled husband and father, and the well-meaning but mishap-prone host of a home-repair show called Tool Time. Anticipating forensic scrutiny of his past by the media, Allen stepped forward and revealed that, from 1980 to 1983, he had served a federal prison term for possession and distribution of narcotics. ABC executives nonetheless pledged their full support to Allen and the potential success of the sitcom, and the show debuted in the fall of 1991. Critics were divided on the show’s appeal, but TV viewers loved it, and Home Improvement managed to break into the Nielsen top ten list during its first season on the air. And it only went up from there.

By 1994, Allen’s first book, Don’t Stand Too Close to a Naked Man, and first feature film, The Santa Clause, both ascended to number one at the cash register. (The movie was the biggest comedy moneymaker of the year and Allen cracked that his book topped the Pope’s because the Pontiff wouldn’t do signings at Barnes & Noble.) With his television show, book, and movie all under the Disney banner, Allen left behind his former lone-wolf status to become the darling of the empire; even Mickey was jealous. The studio gave Allen a $75,000 Porsche as a token of its appreciation. Allen returned the favor by providing the voice of space ranger Buzz Lightyear in the megahit Toy Story.

In 1996, Allen published a second book, I’m Not Really Here, in which he ruminates on parenthood, fame, and other matters spiritual and philosophical, while puttering through his home in search of a missing 1956 Ford hood ornament. The actor’s Midas touch failed to make the 1997 comedies Jungle2Jungle and For Richer or Poorer hits, and 1998 has thus far seen a distinct dearth of Allen on the big screen. His voice, at least, will return to theaters next year, when he reprises his Buzz Lightyear role for a sequel to Toy Story. As for other potential movie projects for Allen, his name has been mentioned in connection with a movie version of the Dr. Seuss book The Cat in the Hat and with the sequel Santa 2: Escape Claus. In the meantime, he will continue for at least one more season of Home Improvement, each episode of which will net him a cool $1.25 million.