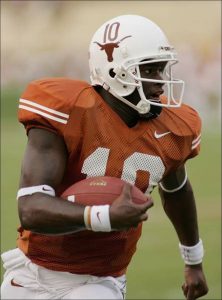 He is a dual-threat quarterback, and the current starting quarterback for the National Football League Tennessee Titans. Young was drafted by the Tennessee Titans as the #3 overall pick in the 2006 NFL Draft on April 29, 2006. He was awarded honors in his rookie season: NFL Offensive Rookie of the Year and a roster spot on the AFC Pro Bowl team. On April 17, 2007, EA games announced that Vince Young would be on the cover of their NFL video game franchise Madden NFL 2008.

Young played college football for the University of Texas Longhorns before turning professional. As a college junior, he was one of three finalists for the 2005 Heisman Trophy, finishing second to Reggie Bush and ahead of Matt Leinart in the final vote. Young was named the best college football player of 2005 by College Football News, based upon their statistical analysis. Following the Heisman voting, Young led his team to a BCS National Championship on January 4, 2006 in a classic thriller against the defending BCS national champion University of Southern California Trojans in the 2006 Rose Bowl. The game featured two Heisman Trophy winners as Young’s opponents: both USC quarterback Matt Leinart and USC running back Reggie Bush. The game was called one of the most-anticipated games in the history of college football. ESPN has named Young as the 10th best college football player of all time. In perhaps the most spectacular individual college football performance ever, Young completed 75% of his passes for 267 yards and also managed to run for more yards than Bush he totaled 200 yards at 10 yards a carry.

Young decided he would forgo his last year of NCAA college eligibility and become a professional player by entering the 2006 NFL Draft. This decision made him the second player in Longhorn coach Mack Brown’s eight year term as head coach of the Texas Longhorns to enter the NFL with eligibility remaining.

Young grew up in a tough neighborhood in Houston, Texas where he was primarily raised by his mother and his grandmother. His father, Vincent Young Sr., missed much of Vince’s college career because he was in prison for a 2003 burglary conviction.[6] Young credits his mother and grandmother for keeping him away from the street gangs. At the age of 7, Young was struck by a vehicle while riding his bicycle at the corner of Tidewater and Buxley, streets in his Houston neighborhood. The accident nearly killed him, leaving him hospitalized for months after the bicycle’s handle bar went into his stomach. Today, he credits this event for making him into a “tougher” individual. Vince Young wears the number 10 to show love and respect for his mother, Felicia Young, whose birthday is June 10th.