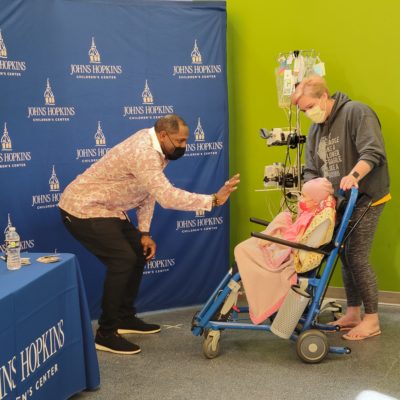 Ray Lewis greets a young patient at the Johns Hopkins Children’s Center as he delivers prize winnings there.
Former Baltimore Raven Ray Lewis made good Monday on his promise to donate prize money from a television show to a Baltimore-based charitable organization.

Lewis won $134,166 after coming in second place on “Beyond the Edge,” a CBS reality show in which celebrities compete in mental and physical challenges to earn money for charity. The show ended its season last week, and Lewis selected Johns Hopkins Children’s Center to receive the money he earned.

On Monday morning, Lewis presented a check representing his winnings to Margaret Moon and David Hackam, co-directors of the Children’s Center, during a ceremony inside the Charlotte Bloomberg building on Hopkins’ East Baltimore medical campus.

Lewis, 47, stayed around to meet with more than a dozen patients, including toddlers and young adults. He signed his initials on cards and gave each patient he met a medallion bearing his likeness, with his uniform number (52) and the words “Ray Lewis Baltimore Ravens 1996-2012” – the years he played linebacker for the team.

Hopkins representatives said the money is available immediately and would be used to support Hopkins’ Pediatric Emergency Critical Command Center and its Pediatric Trauma and Burn department.

The first patient to meet Lewis was Jeani Lyles from Chesilhurst, New Jersey, in the hospital for a spinal cord injury and hoping to go home Wednesday. A fan of Lewis, she wore purple and gold socks in honor of the Ravens. Others waited patiently in line to meet Lewis, some in wheelchairs or hooked up to intravenous equipment.

Moon and Hackam said Lewis has supported the Children’s Center in the past and visited with patients there out of the limelight.

“He does it in a quiet way,” Moon said. “He doesn’t want a lot of attention.”

“They relate to him so well, it’s amazing,” Hackam said. “We’re very grateful for the support.”

Ed Gunts
Ed Gunts is a local freelance writer and the former architecture critic for The Baltimore Sun.