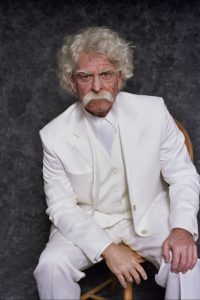 Alan Kitty began impersonating Mark Twain in 1979. The show, titled ”Alive and Well”, was the kickoff project for the City of Harrisburg’s revitalization project. And it was the first performance in what was to become the Whitaker Performing Arts Center of Harrisburg, Pennsylvania.

Kitty has since portrayed Twain on stage and screen, and for Corporate Events, Programs, and Trade Shows in 22 states. Unique among Twain impersonators, Kitty combines Twain’s observations with original material for each event from client notes, research, and his own business experience. Off-Broadway and on-tour, his one-man show titled ”Mark Twain’s Last Stand” consistently meets with stellar reviews and audience acclaim. At the lectern, his speeches and seminars for professionals in Healthcare, Banking, Project Management, Manufacturing, and Pharmaceuticals have won the hearts (and minds) of every audience.

Alan uses Twain to reach audiences of every kind in any situation. As a skilled facilitator he has created a unique team-building seminar. As a dinner speaker, he combines research, Twain humor and client needs to deliver a memorable and unique address. As a Trade Show marketing tool, he can fill a booth and make a new product the hit of the show.