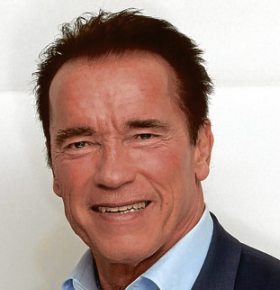 Celebrity Speaker, bodybuilder, actor, businessman, investor and former governor of California, Arnold Schwarzenegger is a man of many talents.

He began to weight train at 15 years old. By age 20, he was awarded the title of Mr. Universe and went on to win the Mr. Olympia contest seven times. Arnold gained Hollywood fame as an action film icon. Nicknamed the Austrian Oak and the Styrian Oak in his bodybuilding days; Arnie during his acting career and the Governator during his days in office.

Arnold was elected on October 7, 2003 as the Republican Governor over a special recall election to replace then-Governor Gray Davis. After he finished the remainder of Gray’s term, Arnold Schwarzenegger was re-elected on November 7, 2006 to serve a full term as governor. As an actor, Arnold’s success was at its pinnacle in the 1980’s and 1990’s when he starred in a number of box office hits. Arnold’s role as The Terminator in Universal’s The Terminator franchise has perhaps been his most notable role. In July 2015, the franchise’s fifth installment, Terminator Genisys was released, fulfilling his promise of, “I’ll be back.”, to Terminator fans across the world.

In 1992, Celebrity Speaker Arnold and his then wife Maria Shriver opened a restaurant in Santa Monica called Schatzi On Main. He was also a founding celebrity investor in the Planet Hollywood chain of international theme restaurants along with Bruce Willis, Sylvester Stallone and Demi Moore.