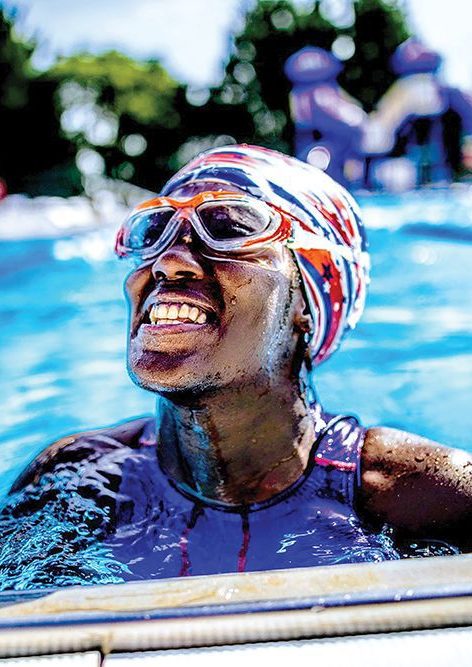 Ashton Smith, a 33-year-old champion swimmer from Fort Worth who competed in the Special Olympics World Games, has been suspended by the organization following a dispute with another athlete that exploded online.

Smith learned to swim at the YMCA in Waxahachie when she was 8 and has been competing in Special Olympics events ever since.

“I want the best for myself. It means a lot to me. Sports gives me self-esteem and desire each day,” she said.

In 2018, Smith won multiple medals including gold in the 100-meter butterfly at the Special Olympics’ national competition in Seattle. A subsequent interview went viral.

“No matter what disability you have, you do not let society dictate what you cannot do,” she told ESPN in a televised poolside interview.

Smith, whose story of resilience in the face of homelessness has been documented by both local and national media, has been a vocal critic in recent months of the organization’s financial assistance policies.

Smith was homeless when she first arrived in Fort Worth over 10 years ago. She’s since found subsidized housing, but she says it’s difficult on a fixed income for her to afford equipment and travel expenses.

Smith’s interest in swimming started at the Waxahachie YMCA. Her experience in the pool led her to compete on the Waxahachie High School swim team from 2001-2004, during which time she earned four district medals.

Smith, who is blind in one eye, counts her strokes as she swims to keep track of her distance from the pool’s wall. This also helps with depth perception. She said doctors have told her that if they were to attempt to correct her vision the procedure would kill her.

“It does a lot for me as an adult with a disability because there are not many things that you are accepted in,” she said. “But, with individual sports like swimming, if you are good enough you will be accepted if you are disabled no matter what.

“That is what swimming has provided to me, is an outlet pretty much year-round to do things and go places,” she said. “It has provided me a lot and I could never have dreamed of going to another country.”

“My goal is to make sure that I am an example to African-Americans and minorities to show them that they can do this,” Smith said. “It is an honor to represent my country. The biggest honor will be to hear the national anthem played. It is something that I have never been a part of.”