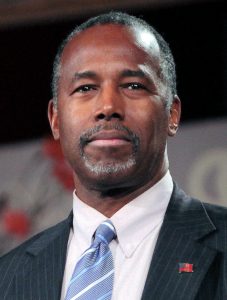 Benjamin Solomon Carson had a childhood dream of becoming a physician. Growing up in a single parent home with dire poverty, horrible grades, a horrible temper, and low self-esteem, appeared to preclude the realization of that dream. But today he is the director of pediatric Neurosurgery at the Johns Hopkins Medical Institutions, a position he has held since 1984, when he was 33 years old. He is a professor of neurosurgery, oncology, plastic surgery, and pediatrics.

In 1987, he gained worldwide recognition as the principal surgeon in the 22-hour separation of the Binder twins from Germany. This was the first time occipital craniopagus twins had been separated with both surviving. The procedure employed hypothermic arrest, the deliberate lowering of body temperature, and circulatory arrest, and sophisticated surgical reconstructive techniques for success. In 1997, Dr. Carson was the primary surgeon in the team of South African and Zambian surgeons that separated type-2 vertical craniopagus twins (joined at the top of the head) in a 28-hour operation. It represents the first time such complexly joined Siamese twins have been separated with both remaining neurologically normal.

He is noted for his use of cerebral hemispherectomy to control intractable seizures as well as for his work in craniofacial reconstructive surgery, achondroplasia (human dwarfism), and pediatric neuro-oncology (brain tumors).

Dr. Carson is a recipient of numerous honors and awards including more than 20 honorary doctorate degrees. He is a member of the American Academy of Achievement, the Horatio Alger Society of Distinguished Americans, the Alpha Omega honor Medical Society, and many other prestigious organizations. He sits on many boards including the Board of Directors of Kellogg Company, Costco Wholesale Corporation, Yale Corporation, which is the governing body of Yale University, and Americas Promise. In addition to his academic responsibilities, he is a highly sought after motivational speaker having spoken in venues as varied as high school graduations to keynote address at the 1997 Presidents National Prayer Breakfast.

He is the president and co-founder of the Carsons Scholars Fund, which recognizes young people of all backgrounds for exceptional academic and humanitarian accomplishments. He hopes this program will positively change the perception of high academic achievers among their peers across our nation.

His three books, Gifted Hands, THINK BIG, and most recently The Big Picture, provide inspiration and insight for leading a successful life. He believes strongly in God and in America and believes that we can all play a positive role in a creating a better world.

Dr. Carson has been married to Candy Carson for twenty-seven years and has three sons. His wife and sons comprise the Carson Four, an accomplished string quartet. And yes, his mother, Sonya Carson, who made all this possible, is alive and well.