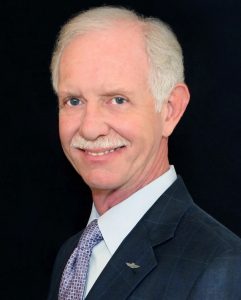 Chesley B. “Sully” Sullenberg has been dedicated to the pursuit of safety for his entire adult life. While he is best known for serving as Captain during what has been called the “Miracle on the Hudson,” Sullenberger is an aviation safety expert and accident investigator, serves as the CBS News Aviation and Safety Expert, and is the founder and chief executive officer of Safety Reliability Methods, Inc., a company dedicated to management, safety, performance and reliability consulting.

Born and raised in Denison, Texas, Sullenberger pursued his childhood love of aviation at the United States Air Force Academy. In his graduation year at the academy, he received the Outstanding Cadet in Airmanship Award. In addition to his bachelor’s degree in psychology, he also has two master’s degrees, one in industrial psychology from Purdue University and one in public administration from the University of Northern Colorado. He also has an honorary Doctorate of Letters from Purdue University.

Upon graduation from the Academy, Sullenberger served as a fighter pilot for the United States Air Force from 1975 to 1980. He advanced to become a flight leader and a training officer, attaining the rank of captain. During his active duty, he was stationed in North America and Europe. After serving in the Air Force, Sullenberger became an airline pilot with Pacific Southwest Airlines, later acquired by US Airways, until his retirement in March 2010.

Prior to gaining worldwide attention, Sullenberger was an active and ardent safety advocate throughout his four-decade-long career. He was selected to perform accident investigation duties for the United States Air Force, and served as an Air Line Pilots Association (ALPA) representative during a National Transportation Safety Board investigation. Additionally, Sullenberger served as a Local Air Safety Chairman for ALPA, and was a member of one of their national technical committees, where he contributed to the creation of a Federal Aviation Administration Advisory Circular. He was also instrumental in developing and implementing the Crew Resource Management course used by US Airways, and he has taught the course to hundreds of other airline crewmembers.

After logging more than 20,000 hours of flight time Sullenberger became internationally renowned on January 15, 2009 when he and his crew safely guided US Airways Flight 1549 to an emergency water landing in New York City’s frigid Hudson River. The Airbus A320’s two engines had lost thrust following a bird strike.

Sullenberger and his crew received international acclaim for their actions that day, including the passage of a Congressional resolution recognizing their bravery. Sullenberger was ranked second in TIME’s “Top 100 Most Influential Heroes and Icons of 2009” and was awarded the French Legion of Honor.

From 2009 to 2013, Sullenberger served as co-chairman of EAA Young Eagles—a program that inspires and educates youth about aviation. He is The New York Times best-selling author of Highest Duty: My Search for What Really Matters and also wrote Making a Difference: Stories of Vision and Courage from America’s Leaders. He is an international lecturer and keynote speaker at educational institutions, corporations and non-profit organizations about the importance of aviation and patient safety, crisis management, life-long preparation, leadership and living a life of integrity. In collaboration with DuPont Sustainable Solutions, Sullenberger developed and was featured in a multi-award winning video training program, Miracle on the Hudson: Prepare for Safety, which helps employees increase their commitment to safety and transform their organizations’ safety culture. These programs and endeavors are ideally suited to put Sullenberger’s expertise in safety and knowledge of high performance systems’ improvement, to work saving lives, saving money and bringing value to communities.

Sullenberger is married to fitness expert and television personality Lorrie Sullenberger. The couple and their two daughters reside in Danville, California.