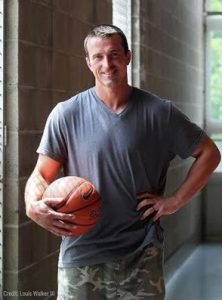 Chris Herren is former NBA basketball player, motivational speaker, author and sobriety advocate who struggled with substance abuse for much of his basketball career. Alcohol and drug-free since August 1, 2008, he has refocused his life to put his sobriety and family above all else.

He shares his harrowing story of abuse and recovery in his memoir, Basketball Junkie, as well as in numerous interviews throughout the Emmy nominated ESPN Films documentary Unguarded, of which he is the subject.

With the hope of reaching just one person and making an impact in their life, Chris travels the United States sharing his story with professional athletic teams and leagues including the NBA, NFL and MLB, University and Colleges, High Schools and Community Groups. Since 2009 he has spoken to over 500,000 people nationwide and is thankful for each day that he can share his story to further a message of hope and that is it never to late to start a new chapter in your life.