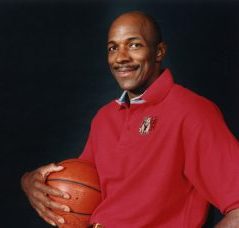 Clyde Drexler was selected in the first round of the 1983 NBA Draft by the Portland Trail Blazers. He was a key component of the Trail Blazer teams that reached the NBA Finals in 1990 and 1992.

In 1992, he finished second to Michael Jordan in Most Valuable Player voting. He was also selected to the U.S. Olympic basketball team, nicknamed “The Dream Team”, which won the gold medal in Barcelona.

Drexler was traded to the Houston Rockets in 1995 and, along with Hakeem Olajuwon, helped lead the team to a second consecutive NBA championship. Drexler stayed with the Rockets for three more seasons before retiring from the NBA after the 1998 season to become head men’s basketball coach at his alma mater, the University of Houston.

Drexler’s #22 jersey has been retired by the Rockets, Trail Blazers and University of Houston. He was inducted as a player into the Naismith Memorial Basketball Hall of Fame on September 10, 2004, in his first year of eligibility. He was also named one of the NBA’s Fifty Greatest Players.

Prior to his NBA career, Drexler attended the University of Houston where he was part of the famous “Phi Slama Jama” basketball fraternity renowned for its acrobatic, “above the rim” style of play.

Drexler helped lead the Cougars to consecutive Final Four appearances in 1982 and 1983.