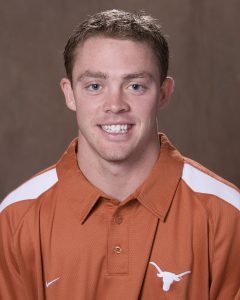 NFL Quarterback, Graduated As The Winningest QB in College History

Colt McCoy graduated as the winningest quarterback in college history, winning 45 of his 53 starts during a storied four-year career at the University of Texas, from 2006 to 2009. He set numerous school records including the NCAA record for highest single-season completion percentage of 76.7 percent. He is the only quarterback in college football history to win at least ten games for four seasons. In 2010, Colt led the Longhorns to the 2010 BCS national championship game and in 2008 was the Heisman trophy runner-up.

Following his college career at UT, Colt was drafted in the third round of the 2010 NFL draft by the Cleveland Browns and played in eight games during his rookie season. Colt played three seasons for the Cleveland Browns, and is now playing for the defending NFC Champion San Francisco 49ers.