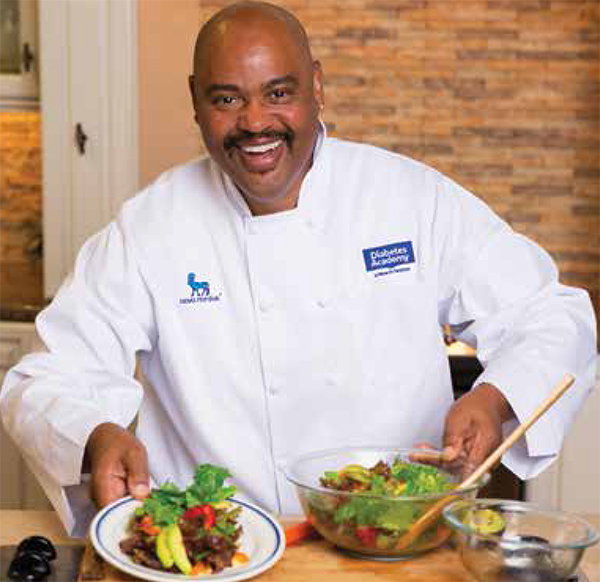 A native Georgian, Curtis Aikens’ attraction to produce began as a small boy, as he followed his Grandfather Curtis through the garden. His interest grew during high school, when he worked at the Conyers, Georgia A&;M Market. ”I was supposed to be in the grocery department,” he recalls, ”but I hung out in produce because that’s where all the action was.” His enthusiasm soon became a career.

After attending Southern University in Baton Rouge, Louisiana, Curtis vacationed in California, and was drawn to relocate, quickly finding work at an Alpha Beta grocery store in the San Francisco Bay Area. During this seven-year stint in California, Curtis opened his first produce company, called Peaches.

Next, Aikens moved to New York, to head the produce departments at Dom’s Wholesale Market and at Balducci’s He was responsible for such clients as the United Nations Cafeteria, the Plaza Hotel and the US Open Tennis Tournament. Curtis’s television career began as a consultant and food stylist on commercials for Pizza Hut, Pillsbury and McDonalds.

In 1988, Curtis returned to Georgia to begin Aiken’s Family Produce, Inc., a wholesale and retail supplier of produce for clients which ranged from the Rockdale County School System to the TV series In the Heat of the Night and the feature film Glory. Curtis’ career as a television personality and author began in 1988. Currently. He resides in Novato, California and Conyers, Georgia and is the father of two young sons, Curtis, Jr. and Cole.

He has been with the Food Network since its inception, previously as the host of Pick of the Day, From My Garden, Meals Without Meat, and Food IN A Flash. Curtis is quick to point out that his expertise with produce does not mean that he is ”anti-meat.” ”I just love fruits and vegetables,” he says.

Curtis G. Aikens was 26 years old when he learned to read. Six years later, he had become a published author. How did this charming articulate man get by for so many years? How does an adult manage to be successful in business when he’s illiterate? Moreover, how did Curtis Aikens make that long journey to literacy?

When racial desegregation finally came to Georgia, Curtis was a second-grader at an all-black school. Despite his youth, he was well aware that something had always been missing from his education ”It wasn’t learning” he recalls, ”It was babysitting.” His life changed when he was given the choice to transfer to Pine Street Elementary, a previously all-white school. However, this second chance was in some ways too late Curtis was hopelessly behind his classmates. Reluctant to be discovered, Curtis channeled his ample talents into a charade of literacy. His keen intellect helped him remember everything he heard in class. Forced to take a test, he would scribble illegible answerswhen the teacher asked for a translation, he could answer orally. Curtis’ appealing, likable personality caused people to be predisposed to helping him out. No one wants to see a nice guy fail. And so, Curtis Aikens made it through high school, into college, and actually owned his own business without ever really knowing how to read.

In the early 1980’s, Curtis moved to California, finding work in the produce business. From 1981 to 1986, he operated his own successful produce company, Peaches. He learned to speak correctly by watching television, but he was still haunted by problems of illiteracy. Success scared him. He developed a pattern of destroying what he had achieved, for fear his illiteracy would be discovered. ”I thought I was too stupid to succeed,” Curtis remembers. ”I felt I didn’t deserve it.”

Then one day, while watching television, Curtis Aikens saw a commercial for the Marin County Free Library Literacy Program. He decided to get help and at age 26, he finally learned to read. Today, he is a popular television and radio personality, a celebrated chef and culinary consultant, and the published author of three books: Garden Grocer’s Guide to the Harvest, Curtis Aikens’s Guide to the Harvest and Curtis Cooks With Heart and Soul. His fourth book, titled Recipes to Weight Loss and Its Control was published in the fall of 1997. Now an outspoken advocate for literacy, Curtis shares his story with schools and literacy groups across the country, and donates a portion of his royalties to literacy programs.