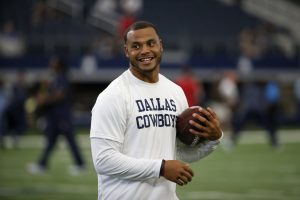 Rayne Dakota “Dak” Prescott (born July 29, 1993) is an American football quarterback for the Dallas Cowboys of the National Football League (NFL). He played college football for the Mississippi State Bulldogs and was selected by the Cowboys in the fourth round of the 2016 NFL Draft.
Intended to serve as a backup in his rookie season, Prescott became the Cowboys’ starting quarterback after original starter Tony Romo was injured in the preseason and earned recognition during the year for his on-field success, which included helping the team clinch the top seed in their conference. Prescott set several rookie quarterback records and was named the NFL Offensive Rookie of the Year, and also earned a Pro Bowl selection.