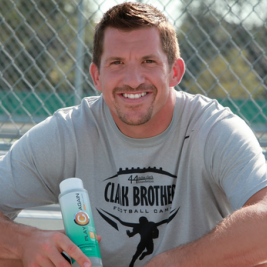 Dallas Dean Clark (born June 12, 1979) is a former American football tight end who played 11 seasons in the National Football League (NFL). He played college football for the University of Iowa, earned unanimous All-American honors, and was recognized as the top college tight end in the nation. He was drafted by the Indianapolis Colts in the first round of the 2003 NFL Draft and he was a member of their Super Bowl XLI championship team against Rex Grossman and the Chicago Bears. He also played for the NFL’s Tampa Bay Buccaneers and the Baltimore Ravens