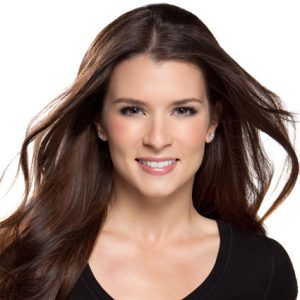 Danica Patrick has become one of the most recognizable athletes in the world. Danica’s determination, versatility and commanding presence have all led to her success on and off the racetrack.

Danica was never timid or discouraged in tough situations. At age 10 she competed against boys when she started her career in the karting circuit. She moved to England at 16, where she raced in some of the most difficult junior series in the world. And she ignored skeptics when she joined Indy Car in 2005 – everyone thought a professional female driver could never be anything more than a pretty face.

In 2008, Danica proved not only to be a good driver, but the best female driver in history by winning the Firestone IndyCar 300 Twin Ring Motegi in Japan. Danica became the first woman to win a major auto-racing event. This illustrious career has now brought her to compete in NASCAR. In 2011, Danica became the first woman to lead a lap at Daytona International Speedway in the NASCAR Nationwide Series. Later in the season, Danica made history with the best finish ever by a woman in NASCAR, finishing 4th at the Sam’s Town 300 in Las Vegas. In late August 2011, Danica announced she was moving full-time to NASCAR for the 2012 racing season.

In 2013, she finished 8th in the Daytona 500 NASCAR Spring Cup Series, earning the highest finishing position ever for a woman. She made even more history by leading laps 90-91, becoming the first female to lead in NASCAR’s most prestigious race. Danica made similar history in 2005 when she led 19 laps in the 2005 Indianapolis 500. She is one of only 13 people to have led both Daytona and Indy.

Danica has been successful off the track as well, where she has graced the covers of ESPN: The Magazine, Sports Illustrated, Shape and TV Guide, as well as being featured in the Sports Illustrated swimsuit issue. She can also be seen on the couches of Ellen, The Late Show and Jimmy Kimmel Live.

Due to her varied successes, Danica is an inspiration, not only to girls and women everywhere whom she empowers to achieve their goals, but to everyone who has ever had the courage to dream big.