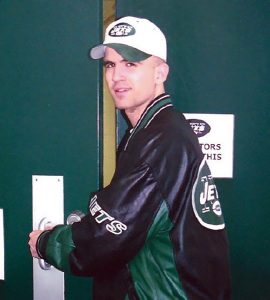 Daniel Kelly is a former pro scout with the New York Jets. He spent four seasons working on one of the best staffs in NFL history with people such as Bill Parcells and Bill Belichick. It was during his time in New York, that he had what can only be described as a Damascus Road experience when he was radically filled with the Holy Spirit and the passion of his heart shifted overnight from football to Jesus Christ. That happened on August 31, 2001. Ever since, He has been his everything and He’s Daniel’s bottom line. Last April, Daniel released his first book, ”Whatever it Takes,” The true story of a fan making it into the NFL. He was fired from his job for sharing the Gospel and he stepped into full time evangelism, with only Jesus Christ leading him and his family.

The doors He has opened and continues to open have been amazing and beyond anything Daniel could ever orchestrate. It’s been off the charts. He’s been invited into 13 places so far to preach my testimony, the modern day gospel message He has entrusted to Daniel for His Glory. It’s been an overall incredible experience and it feels like what he was born to do when he steps into the pulpit.