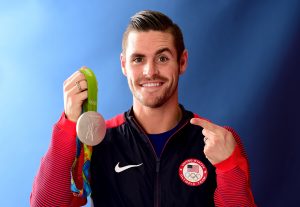 David Boudia decided that he was going to be an Olympian at 7 years old while watching the opening ceremonies of the 1996 Atlanta Olympic Games.

After years of training, his dream came true in 2008 when he competed at the Beijing Olympics, and then later won a Gold and Bronze medal at the 2012 London Olympics.

His dream may have come true, but he’s far from done following it. With 16 National titles and two Olympic medals, David Boudia is the top 10-meter platform diver in the U.S. and one of the best in the world, in both the individual 10-meter and synchronized 10-meter events.

Boudia began his diving career at age 11 in 2000. Though a dive from the height of an Olympic 10-meter platform once petrified him, he forced himself to overcome this fear to pursue the sport he loved. By 2005 he was a member of the U.S. National Diving Team and won the National Championships that year (synchro). He was homeschooled after 10th grade in order to focus on diving, with an eye on the 2008 Beijing Olympics. From 2006-2008 David and his diving partner Thomas Finchum medaled in 14 major international competitions (10 consecutive). Boudia was named to the 2008 Olympic Team, finishing 10th individual in the 10m platform, and 5th with Finchum in the synchronized 10m.

David competed at Purdue University where he broke several records and won a host of major competitions, finishing his college career with six NCAA national titles. While at Purdue he continued to thrive on the international stage as well- including five medals in the 2012 FINA Diving World Series, also becoming the first American male since 1986 to medal in the 10m platform at a World Championship with his Silver medal-winning performance in China. David officially turned pro in April 2011, forgoing his final year of college eligibility to focus on the 2012 Olympics, but he continues to train with his college coach at Purdue.