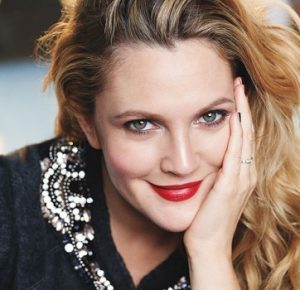 Granddaughter of John Barrymore and member of the Barrymore family of American actors, Drew Barrymore made her first appearance at 11 months old in an advertisement. Her film debut was in Altered States in 1980 and she had her breakout role in E.T. The Extra-Terrestrial. Soon after, she became one of Hollywood’s most known child actors. After struggling with drugs, alcohol and two rehab trips, Drew wrote an autobiography called Little Girl Lost but successfully transition into becoming an adult actress. Drew’s films include Poison Ivy, Bad Girls, Boys on the Side, Everyone Says I Love You, The Wedding Singer and 50 First Dates.

She has been named UN World Food Programme’s Ambassador Against Hunger and has donated over $1 million to this program. Drew has been the recipient of a Screen Actors Guild Award and the Golden Globe Award for Best Actress in a Miniseries or Television Film for her role in Grey Gardens. Drew’s supports many charities and foundations including ASPCA, Declare Yourself, Much Love, Red Cross, Shop For Charity, The Rescue Train, and World Food Programme. Drew Barrymore is available for speaking engagements, personal appearances, and endorsements. She also is a new york times bestseller with her novel Wildflower.