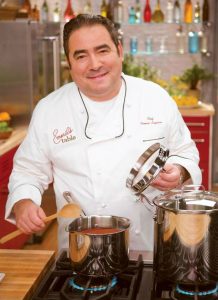 Emeril is also a national television personality, hosting Television Food Network’s highest-rated program, ”The Essence of Emeril,” and he has also become an established cookbook author, sharing his inventive cuisine in Emeril’s New New Orleans Cooking and taking the backroads through the bayou to uncover Louisiana Real &; Rustic.

Emeril, who is of Portugese and French Canadian heritage, grew up in the small town of Fall River, Massachusetts, where he worked in a local Portuguese bakery and learned the art of bread baking and pastry. As a teenager he turned down a music scholarship to follow his dream of cooking and worked his way through the culinary program at Johnson and Wales University, from which he received an honorary doctorate. Emeril trained in France and then returned to work in New York, Boston and Philadelphia. Persuaded to move to the Big Easy, Emeril fell in love with New Orleans and worked as executive chef at the legendary Commander’s Palace for seven and a half years before opening his own restaurants.