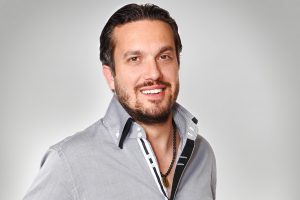 Chef Fabio Viviani has possessed a passion for food since his childhood growing up in Florence, Italy. Between his training in Italian and Mediterranean cuisine at IPSSAR Saffi and working with culinary luminaries such as Alessandro Panzani and Saverio Carmagini, Viviani owned and operated five restaurants in Florence, a farm house, and two nightclubs by the time he was 27. Although a well-respected businessman in Italy, he was ready for a change and in 2005, Viviani moved to Ventura County, CA, where he opened Café Firenze in Moorpark, CA.

Teaming up with one of Chicago’s most innovative restaurant consulting groups, Dine|Amic, Viviani went on to open Siena Tavern in Chicago in 2013, receiving accolades from Michigan Avenue and Chicago Tribune, to name a few. The year 2014 saw the debut of both Mercato by Fabio Viviani, a quick-service Italian concept with branches in Chicago and San Diego, and Fabio Viviani Wine Collection featuring wines from his two wineries in California. In 2015, Viviani continued to make a name for himself in Chicago by opening Bar Siena and Prime & Provisions. The following year, Viviani expanded beyond Chicago to open Osteria by Fabio Viviani at the LAX Delta Terminal and several other Mercato by Fabio locations in Tempe, Phoenix, Cleveland, and Benton Harbor. He plans to open a Detroit branch in March 2017, hot on the heels of his February 2017 opening of Portico by Fabio Viviani in the del Lago Resort & Casino in Tyre, NY. Moreover, in late 2016, he purchased a lobster fishing company in Maine to launch a home seafood delivery service called Lobster by Fabio.

Perhaps best known for his television debut on Bravo’s hit reality series Top Chef—earning the “Fan Favorite” title—his on-screen appearances have propelled him to become one of the fastest growing household names in the country. He is a recurring guest on national television shows such as Good Morning America, The Rachael Ray Show, The Chew, and countless Food Network Shows such as Cutthroat Kitchen: All-Star Tournament, which he won. In February 2017, he also released his own online cooking show, “Fabio’s Kitchen,” a 52-episode series hosted on YouTube.

Off-screen, Viviani is a regular headliner at global food events and festivals. He also has his own lines of cookware and culinary gadgets, and has been a proud spokesman for international brands such as Arnold Premium Breads, Bialetti Cookware, Bertolli, Johnsonville Sausage, and Legends of Europe. He has authored three successful cookbooks: Café Firenze Cookbook, New York Times Best-Seller Fabio’s Italian Kitchen and Fabio’s American Home Kitchen and is planning to release his fourth cookbook, Fabio’s 30-Minute Italian, in May 2017.

Among Viviani’s other passions, he has a knack for business and entrepreneurship. A prolific tech investor and business speaker, not only has he delivered over 300 keynotes in the past 7 years, but he has also featured at several Fortune 500 companies’ corporate functions to share expertise in branding, social media, and marketing. In 2016, Viviani launched his Know-How Leadership Academy, an online educational platform with guides and courses for small businesses and entrepreneurs. Most recently, he merged his mind for innovation with his passion for food when he collaborated with Chicago-based Sapphire Apps to release Food Porn Emoji by Chef Fabio Viviani, the first HD food emoji keyboard on the app market.

His varied accomplishments have impressed many, resulting in his induction into the Chicago Culinary Museum and Chefs Hall of Fame as 2017 Chef of the Year on March 8, 2017. Following Viviani’s initiation, the mayor of Chicago also declared March 8, 2017 to be Chef Fabio Viviani Day in Chicago, encouraging Chicagoans to recognize his achievements and contributions not only to his home city of Chicago, but also to the nation’s culinary scene.